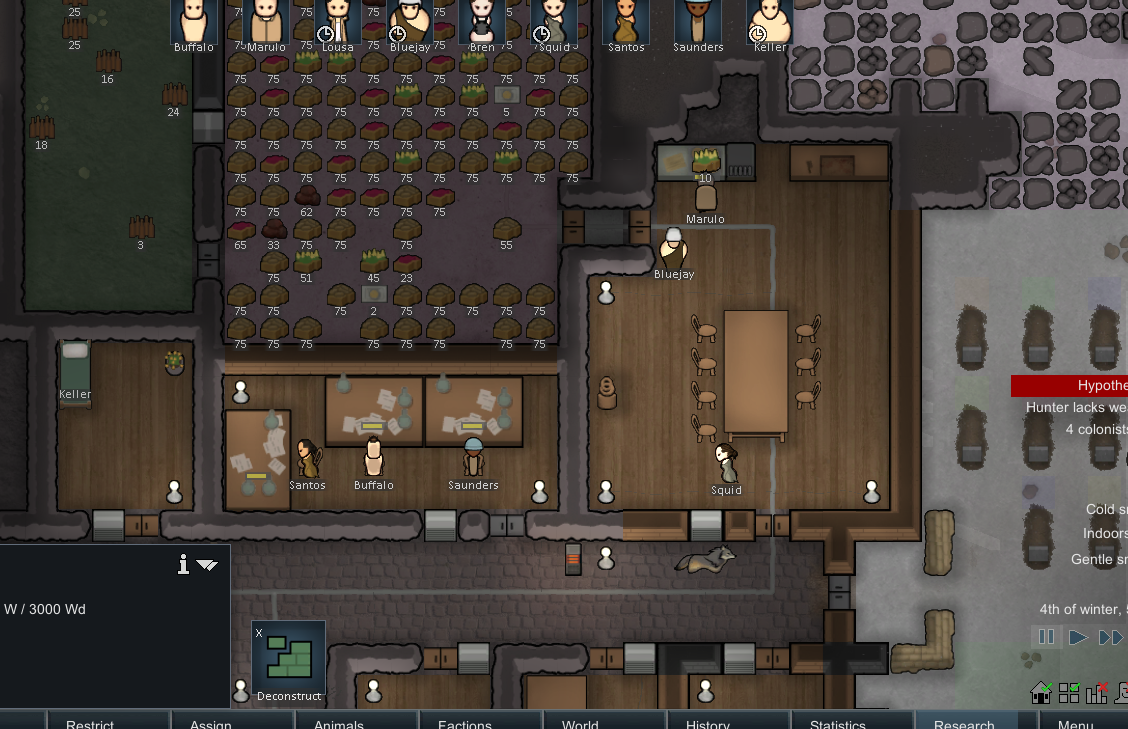 Rimworld: A Quick Review published by Skimmerlit
Writer Rating: 0
Posted on 2016-08-01
Writer Description: I'll be writing about whatever's on my mind at the time: As a neckbeard, this includes politics, current events, and gaming. We'll see though.
This writer has written 2 articles.

Disclaimer: My last review didn't go through because I wasn't aware of how authoring worked using the site's tools, so for anyone looking to write an article- It might be a good idea to write and store what you're saying somehere else, like in Word or Google Docs, so you don't have to start over if something happens. That being said, this review is going to be a bit shorter and more concise than I had initially intended. Let's get into it.

It's pretty good. It's in alpha, so there's a lot more to come, but what's here now is fantastic. It feels like a finished game, with few bugs if any. In 12 hours, I haven't found one yet.

The premise is that three colonists crash land on a shite little planet, and have to survive until they can build a big-boy ship and escape. It was inspired by both Dwarf Fortress and Firefly, which really shows in its gameplay and atmosphere respectively.

The basic gameplay will have you managing colonists as they carry out tasks like gathering wood, mining, hunting, building, eating, etc. You'll also be managing their attitudes and roles in the community, based on each colonist's individual traits, strengths, and weaknesses. Some people are night owls, who are upset during the day but have an improved mood at night; Some are brawlers, who have innately high melee crit chance and damage, but will get very upset if they have to hold a gun; Some people get a mood boost by witnessing violence, but are incapable of violence themselves; Some people are staggeringly ugly, and have to live with being hated. A lot of these colonists are vanilla, but you can also pay a bit extra to create your own colonist and have it added into the next update for everyone to use. You can tell vanilla colonists from the custom colonists very easily based on their names and some of their attributes: For example, Paupin "Poopy" Williams, an obese nudist woman who hates men, and is incapable of both intellectual work and dumb labor. Thankfully, you can euthanize settlers and harvest their organs. Ms. Williams kept the hounds fed for months.

The game's classic start involves trying to get off the planet, but all other starts (built in or custom made) don't have this main goal set. There isn't really an overarching or main story, either. The "story" is created by your experiences, and driven by one of three AI Storytellers. They aren't really storytellers as much as they are alternate difficulty settings, who decide how often you'll see random events. These events can be positive, like new colonists roaming in or a psychically soothing noise. Other (most) events are negative, like nuclear fallout or volcanic ash, which can leave you trapped indoors and without food for months on end. The storytellers create very different games using the intensity and frequency of these events: Cassandra takes the standard approach by curving the difficulty up over time. Phoebe is more relaxed, giving you plenty of time between events to get situated- Even though she'll still kick your shit in if you aren't prepared, I'd recommend her to first time players or anyone more focused on base-building than survival. Lastly, we have Randy. Randy will drop any combination of events on you from day one, absolutely destroying you or pulling you out of impossible circumstances. Nothing with Randy is reliable, and I'd recommend him to anybody who likes games to be short, fast, and challenging.

My only complaint about the game comes from the events. The storyteller you choose only delays the inevitable: Unless you escape the planet, you're going to die. On one of my colonies, I was using Phoebe on the medium difficulty. All at once, all my colonists came down with the flu, the plague, and malaria. Over the next week, the colony became a nightmare as everyone slowly lost their minds from starvation and anger, trying to kill each other in their beds and cannibalising one another. On another colony, fallout and volcanic ash set in at the same time, killing all the crops and animals, forcing me to watch helplessly as my colonists starved to death. Death is inevitable. You could scale back the difficulty, but anything lower than rough (medium) feels noticably shallow, and takes the rewarding feeling away from playing; You could choose a different storyteller, but Phoebe is the most relaxed one of the bunch, and she still stacked three heavy sets of sickness on at once. These events aren't insurmountable by any means, but the right combination of them spells certain doom every time. This is just part of the game though, and it's oddly fascinating: After all my colonists died, I spent about an hour last night watching the base decay. The turrets stayed up for awhile, and chewed up a small raiding party and a bunch of bugs, but after the batteries exploded and one of the windmills went down, the base went dark. Scavengers stopped by and picked through the ruins, and pirates stopped by every now and again to see what had happened to their enemies. The hopelessness of Rimworld can be part of the fun, but it's not recommended for everyone.

That's all I have to say about the actual game. It's made with a lot of care, and has a lot of depth to it. It's only $30, so it's not going to break the bank. There's also Workshop support, so you'll have access to plenty of community content and fixes.