People in Thailand are going to jail for Facebook comments 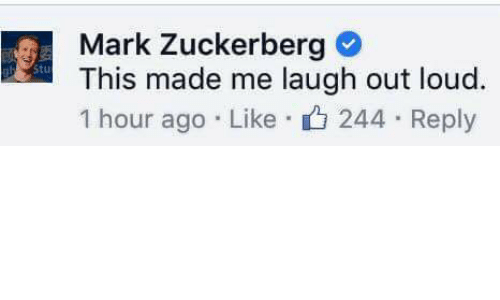 People in Thailand are going to jail for Facebook comments published by nherting
Writer Rating: 2.6364
Posted on 2016-08-03
Writer Description: current events
This writer has written 195 articles.

Richie just wanted to post a sarcastic comment on Facebook. He almost went to prison for it. Others weren't so lucky: these days, people in Thailand can get in serious trouble for posts on social media — if they are deemed to be offensive to the royal family.

"Do dogs have blue blood now?" he said in December, reacting to the news that a man had been charged with making fun of the king's dog and was facing up to 15 years of imprisonment, under the country's lèse majesté law, which punishes anyone who criticizes the king or his family.

"So many friendships end like this here," Richie, a 21-year-old researcher at a Thai Institute in Bangkok, told VICE News. "That is when I truly realized how easy it is for me to go to jail for a comment."

Richie — who asked that his real name not be used, because of security concerns — didn't go to jail, but his story is not uncommon. Since a military junta seized power in 2014, Thai authorities have been monitoring social media to repress any dissenting opinion. Political activists and human rights defenders say the lèse majesté law has been used as a tool to jail opponents.

In August 2015, a man was sentenced to 30 years of prison for insulting the monarchy on Facebook. In January this year, a Thai politician was charged for violating the country's Computer Crime Act and risks years in prison because he shared on social media a video mocking the junta's leader, General Prayuth Chan-ocha.

But on a daily basis — among the youth who grew up with social media and know what Facebook was like before the 2014 coup, who used not to worry whether the messaging apps they use were encrypted or not — the repression has had a more insidious, long-term effect: self-censorship.

"I am one of those rash kinds who truly believe that I should not really care whether I offend anyone or get arrested or not, that I have the fundamental rights to express my opinions even on the most sensitive matter," Richie said. "But you cannot stay like that too long when you are online in Thailand."

Related: Thailand Is in Danger of Becoming an Established Military Dictatorship

Young Thais mostly use Facebook and messaging app Line to communicate on the internet. Neither of them offers encryption, which puts people at increased risk

"Even my family may be threatened by what I would post," Petcharat Saksirivetkul, a 25-year-old human right activist working for a prominent advocacy group in Bangkok, told VICE News. "'We don't want you to get arrested,' they'd tell me, so I stopped. But I did it for the family, not because of the law," she said. "I just don't want them to be concerned about it."

The military junta, known as the National Council for Peace and Order or NCPO, announced in January that it would try to "persuade" Facebook and Line to comply with court orders to remove content the regime deems sensitive.

In May, a Thai activist and critic of the monarchy, who lives in exile, revealed that Facebook had made a page satirizing the royal family unavailable in the country, in what was apparently the first time Facebook caved to the junta.

"This situation is too strict for us, making us not dare to criticize anything," said Wachiravit Kongkarai, a former student activist at Thammasat University and member of the university's political satire club.

Kongkarai, 22, has experienced the clampdown on freedom of expression both on social media and beyond. In May 2015, he and about 30 other students had planned to peacefully protest against the one-year anniversary of the coup in front of the city's Art and Culture Center. The students displayed a clock showing 22:00, a reference to the May 22 coup a year earlier. Hundreds of police broke up the peaceful demonstration and arrested all the students.

"We just wanted to stand and hold the clock to express our message in the most silent way as we could," he said. "We felt like criminals, even terrorists."

In the two years between the military coup and May of this year, 527 people have been arrested, 167 civilians tried in military court, and 68 charged with lèse majesté, according toiLaw, a non-profit organization tracking abuses against freedom of expression in Thailand. Out of the 68 cases of lèse majesté, 21 involved content posted on Facebook, including five cases of people busted for things they'd told friends on Messenger.

Activists say the repression has worsened ahead of the August 7 referendum on the country's draft Constitution.

Rangsiman Rome, a 24-year-old member of the pro-democracy activist group New Democracy Movement and an advocate for voting 'No' to the referendum, told VICE News he uses encrypted apps, such as WhatsApp and Telegram, and tends to avoid phone calls. "It is quite clear that my phone number is bugged," he said.

For the No campaign, Rome keeps communicating on traditional platforms, such as Facebook, Twitter and Youtube. "Although the authorities attempt to suppress our expression – including with Referendum Act – we make sure that none of our activity can be considered illegal, not to mention that we have rights to do so."

The Referendum Act Rome mentioned was passed earlier this year and prevents people from campaigning against the draft Constitution. Five activists were detained in July forreleasing balloons with a message reading "Campaign Not Wrong."

Two eight-year old girls were also charged with "obstructing the referendum process" after they tore down voter lists from a wall because they liked the pink color.

Rome was arrested after he and other activists distributed leaflets and a magazine near Bangkok, explaining why they were against the draft Constitution and how Thais living outside their hometown could register to vote.

Officers grabbed him and forced him into a car, Rome said. All the activists were charged with violating the Referendum Act and the NCPO's ban on public gathering, and were brought to a military court, which sent some of them to jail for 12 days.

Campaigners for No have also been sent to military camps for "attitude adjustment." "The camps existed before the coup, but the way that the junta is using them is scary and absurd," said Amy Smith, the Bangkok-based executive director of Fortify Rights, a human rights organization focused on South-East Asian countries.

Although the junta has used laws to repress freedom of expression that existed prior to its coup, it has made Section 44 of the interim Constitution central to its rule.

"Section 44 basically states that the military junta leader has the right to do anything, anywhere, anyhow, against anyone," said Paul Chambers, a Thailand-based professor of international relations at the Institute of Southeast Asian Affairs who follows the civilian-military relationship in the country. "And there's nothing he's accountable to, except to his Majesty the King."

More than 1,300 individuals have been sent for "attitude adjustment" since the coup, according to Fortify Rights' Smith.

Thai citizens voting in the referendum on August 7 will also have to put their thumbprint on the ballot.

"It's never never been seen on any previous ballot," Chambers said. "It means that there is no secret ballot. The thumbprint of every Thai people isn't registered in the authorities' computers, but it will surely have a big intimidation effect." 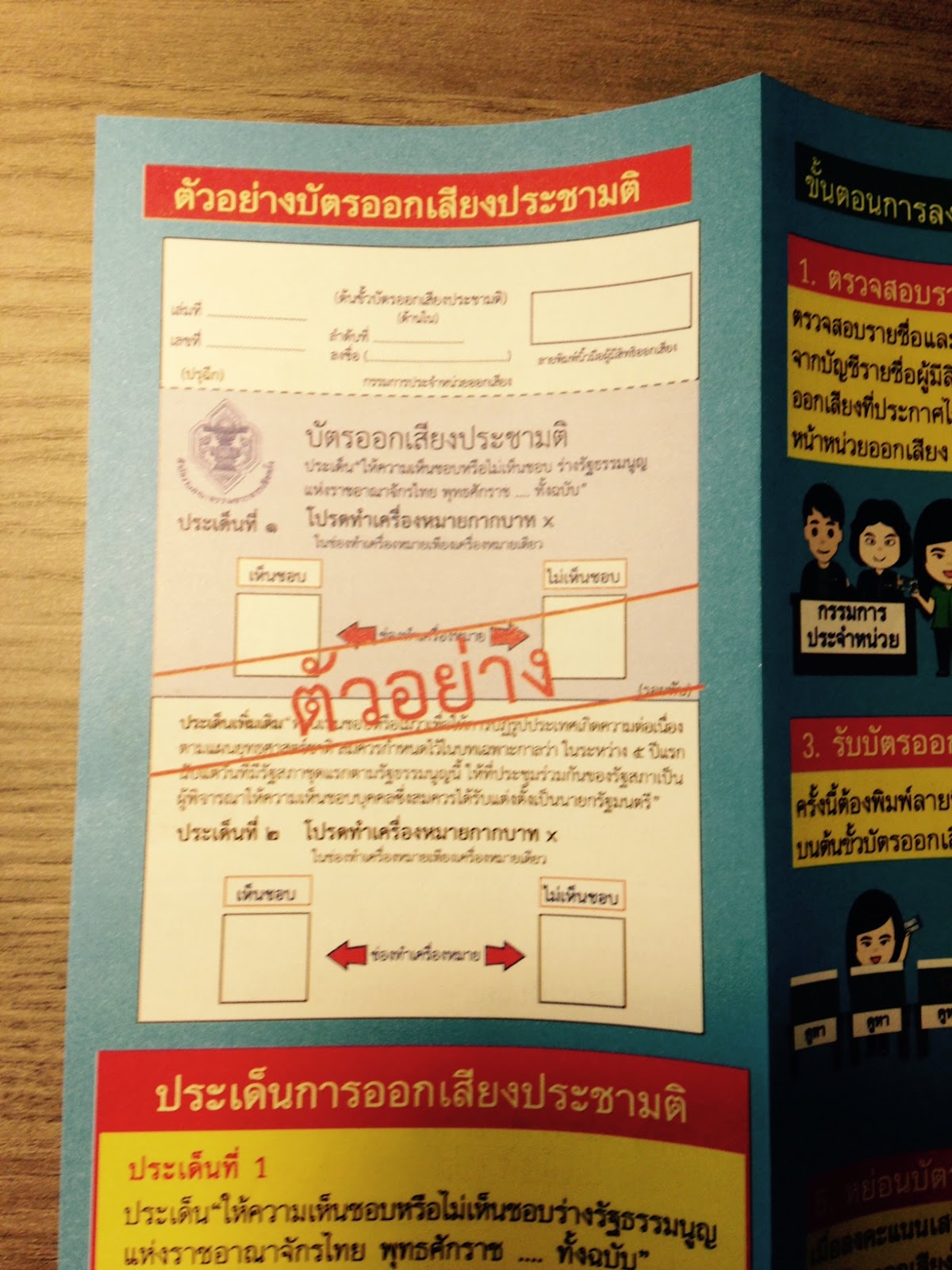 A copy of the ballot that Thai citizens will have to fill on August 7. A blank space has been left in the right hand corner for a thumbprint, making the ballot not secret. (Photo courtesy of Paul Chambers)

The last independent organization that could have monitored the referendum, Thai-based Anfrel, announced on Saturday that it wouldn't be able to, after the government didn't respond to their accreditation requests.

Advocacy groups and human rights defenders have warned against the authoritarian path that the NCPO has been taking, and that the new Constitution, if passed, would enforce.

"Instead of paving the way for a return to democratic civilian rule as promised in its so-called 'road map,' the junta has imposed a political structure that seems designed to prolong the military's grip on power," Human Rights Watch warned in May.

Among several controversial points, the junta wants to fill the Senate with people selected by a junta-appointed committee. "This gives rise to the clear possibility that there will be almost only military-favored appointees," Chambers said.

The six most senior military representatives would also sit in the Senate, which will then, along with the Assembly, nominate an unelected Prime Minister.

"We are making a U-turn toward Thailand's past," Chambers said. "If we look at former juntas in the past, this is the most repressive military regime in the last three decades," he added, warning against the risk of an institutionalization of the military dictatorship. Thailand has had 12 successful military coups since the 1930s.

"People just self-censor themselves more with what they can say, it's very toxic," said Saksirivetkul, the human rights worker based in Bangkok. "When people get used to not talking, it just makes the whole society worse, and this has long-term effects."