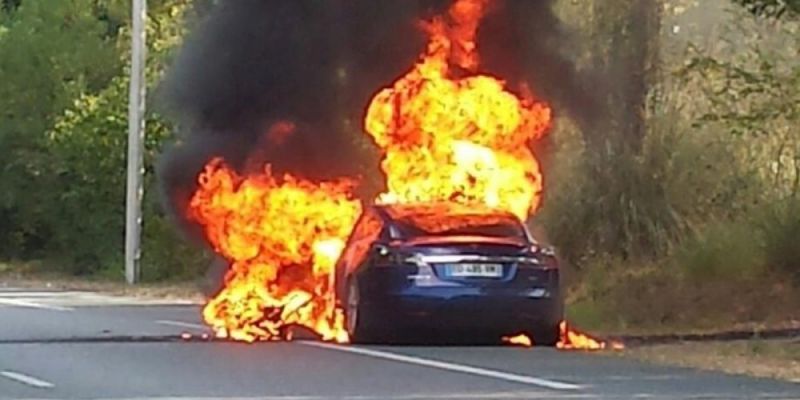 A Tesla Model S has burst into flames during a test drive in the southwest of France. Four people were in the car, including a Tesla employee; they all escaped safely before the car was "totally destroyed" within five minutes of the fire starting.

Tesla confirmed the incident and said that it's working with French authorities to determine exactly what happened, "and will share [their] findings as soon as possible." A Tesla official said: "Nobody was harmed. The vehicle provided warning and passengers were able to safely exit the vehicle."

In the tweet below you can see a video of the burning Tesla. Presumably this was caught a few minutes after the blaze had begun, as there isn't much car left.

According to the driver of the vehicle, as reported by the French newspaper Sud Ouest, he was accelerating along a main road when a loud noise was heard. The vehicle reportedly popped up a warning message, and the Tesla employee then asked the driver to bring the vehicle to a halt. All four occupants proceeded to execute a full and proper disembarkation. "In less than a minute, the car was in flames and, in five minutes, it was totally destroyed," the driver was quoted as saying.

There have been other reported cases of the Model S bursting into flames, but they have always been after a severe impact punctured the lithium-ion battery pack. Tesla added extra shielding to the undercarriage of the Model S back in 2014 to prevent such incidents from happening.

Presumably, in this case in France, the car must have hit some kind of obstacle that broke through both the shielding and the battery pack—or alternatively, there was some kind of catastrophic failure in the car's power system.