Authority or Influence: Which Will You Choose? 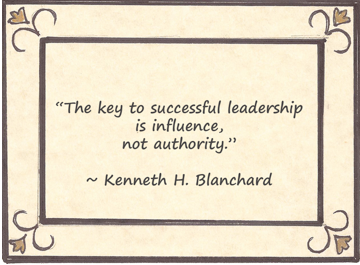 Authority or Influence: Which Will You Choose? published by Maura4u
Writer Rating: 5.0000
Posted on 2017-02-07
Writer Description: Happiness, Self Leadership and a Better Society
This writer has written 56 articles.

NOTE: The following is an excerpt from my upcoming book, Favorite Influence and Leadership Quotes.

Have you appropriated the magic that arises from influence or are you still settling for the downward pressure exerted by authority?

Few consider the difference between these two words. They often exchange one for the other as if they were synonymous, but they are not.

By definition, authority is the power or right to give orders and make decisions. Influence, on the other hand, is the ability to affect ideas and actions.

I can’t speak for everyone, but I prefer the dynamic flow of influence over the gravity of authority. It’s a form of joyous, life-giving leadership. Though not always easy to employ, it delivers satisfying and long term rewards.

Several years ago, I set up my LinkedIn profile and received several connection requests from my previous life in the corporate realm. The connections included a number of people I hired and “managed” plus a few to whom I’d previously reported. Not only were these connections happy to re-establish, but they were more enriching because the business relationships were based on the positive aspects of influence rather than the negative attributes of authority.

It doesn’t take much imagination to think of the times we have been “under” authority. Authority engenders answerability rather than creativity. It involves restraint rather than freedom. And it favors intimidation rather than empowerment.

Perhaps you have followed orders from someone in authority. You may have submitted to a call, but doing so hadn’t necessarily won your inner agreement or personal affection.

Conversely, if you’ve been in the company of one who influences well, you’ve come away from the experience feeling quite the opposite.

Those who lead by positive influence create a completely different social dynamic, one that affects others in much more meaningful ways. If you’ve been fortunate to have encountered one who exudes positive influence, you've experienced the difference. These individuals attract, uplift and empower others with a higher form of energy. They exude an atmosphere that communicates freedom, support and inspiration.

One who leads through influence doesn’t need to demand respect or assent from others. They carry, instead, an unseen, yet highly desirable, presence that invites good people to become better and better people to become their best.

If happiness and well-being comprise one of your life goals, then consider employing the positive attributes of your influence when cultivating and establishing relationships.

You’ll feel more uplifted and empowered, and so will those around you!