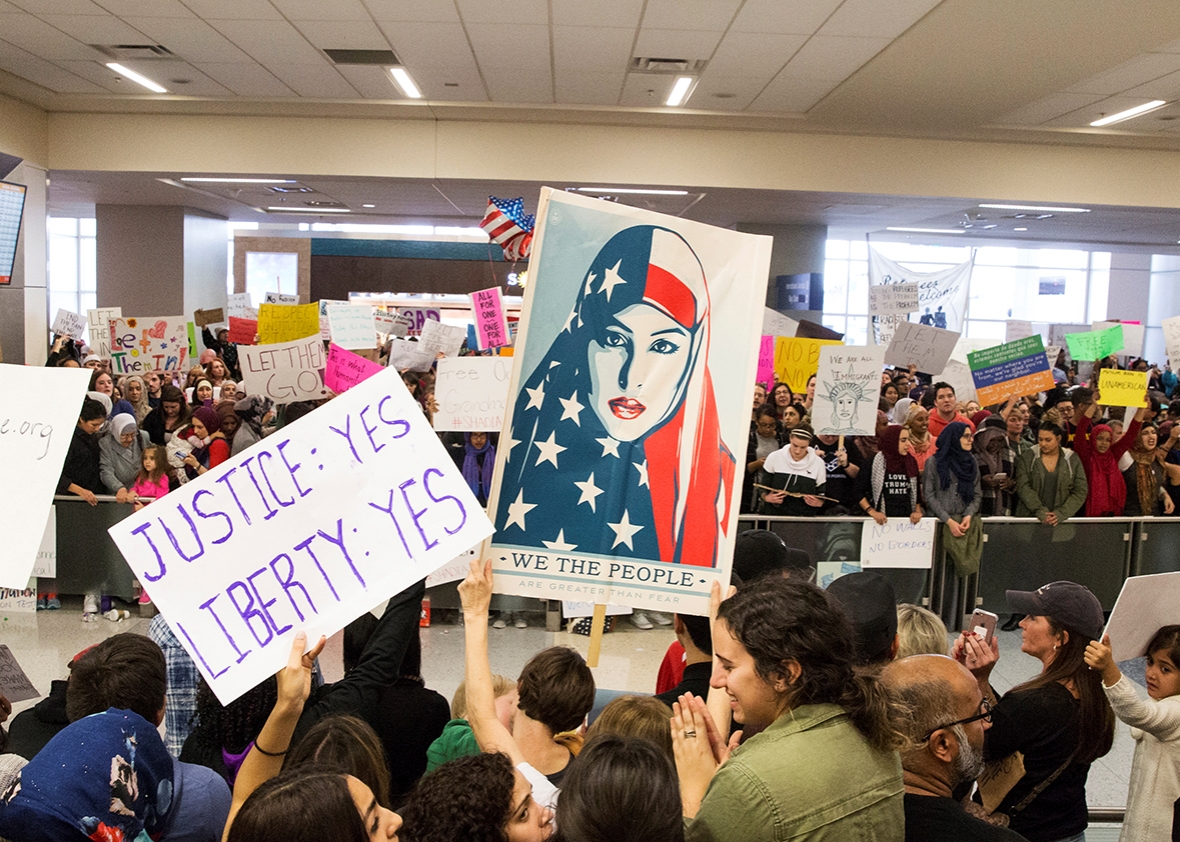 This article is NOT WRITTEN BY ME - this is written by Kerry Abrams and Brandon L. Garrett and I recommend checking out the original posting here.

President Donald Trump’s executive order on refugees and noncitizens states that one of its purposes is to ensure that people admitted to the country “support the Constitution.” It’s clear from the rest of the order, which runs afoul of a number of constitutional provisions, that the president does not.

How unconstitutional is the Trump executive order? Let us count the ways.

Following initial victories won in court by tireless lawyers working at our nation’s airports, in the coming days a new phase of litigation will begin. Lawsuits will turn to the constitutionality of the entire order, and not just how it affects the scores of individuals unconstitutionally detained in the U.S., but all of those affected abroad. Many wonder whether early victories will last. After all, the president has substantial power to oversee immigration. But this order violates not just one but a gamut of mutually reinforcing constitutional rights—and that is why it should not last in the courts.

As law professors who teach constitutional law and immigration law, we fully recognize that executive power over immigration has long been described by courts as broad, even “plenary,” and sometimes able to, well, trump the rights of noncitizens. Yet that power is also committed to Congress, which passed no law authorizing this order. And noncitizens still have constitutional rights, sometimes quite strong ones.

How unconstitutional is the Trump executive order? Let us count the ways:

Get Slate in your inbox.

1. Equal Protection. This order raises discrimination concerns surrounding the Equal Protection Clause of the 14th Amendment, singling out individuals for their religion and nationality by focusing on seven predominantly Muslim countries. Additionally, our immigration laws already forbid such discrimination in issuing visas.

2. First Amendment. The order raises religious freedom concerns, including issues surrounding the ban on government establishment of religion. The law suspends admission of all refugees but asks the secretary of homeland security to “prioritize refugee claims” by members of a “minority religion” in a given country. This effectively means explicitly deprioritizing Muslim refugees in majority-Muslim countries. As Mark Joseph Stern has explained, the apparent preference for Christians of the order itself as well as Trump’s long history of comments supporting a “Muslim ban” will not help the law’s success in the courts.

3. Due Process. The procedures used to enforce the order, if they can be called procedures, are arbitrary. Past Supreme Court cases have permitted individuals to be excluded at the border but only after some modicum of individualized review and administrative process, authorized by laws and regulations. A lack of due process under the Fifth and 14th amendments for those affected should not be hard to show, considering the hasty, sweeping changes enacted without administrative process or legislation, confusion on the ground, and reports of outright refusal to follow court orders. Moreover, green card holders have enhanced rights compared to non-green card holders against arbitrary treatment.*

4. Habeas Corpus. Lawyers at airports have been filing habeas corpus petitions around the clock for people being detained. In recent years, the Supreme Court strengthened the protections of habeas corpus for noncitizens repeatedly in rulings in cases brought by Guantánamo detainees. Less known were earlier rulings strengthening protections for noncitizens in detention facing removal, such as Zadvydas v. Davis. The national security or “plenary” power over immigration did not faze the justices in such rulings.

5. Family Reunification Rights.* The tragic stories of separated families bring out yet another constitutional right at stake that few have commented on: The Supreme Court has repeatedly recognized the importance of the fundamental right to family relationships. Family reunification is also of primary importance in immigration law.

The Supreme Court’s ruling in Obergefell v. Hodges emphasized how multiple constitutional rights magnified the harm of denying same-sex couples the right to marry. “The Due Process Clause and the Equal Protection Clause are connected in a profound way,” Justice Anthony Kennedy wrote for the majority. The constitutional violations in that case were made worse because there was discrimination—over something as important as the fundamental right to marry. Today, these constitutional violations are worse because the order discriminates on the basis of religion, nationality, and ethnicity, over rights as important as due process, the right to family relationships, and the right not to be excluded unlawfully. The equal protection, due process, First Amendment, habeas, and fundamental rights violations that we describe are important standing along but even more devastating to the legality of the order when seen in tandem. As we have written in a 2015 article, constitutional rights magnify their power when they share reinforcing interests.*

There will always be cases where national security interests outweigh constitutional rights. But those should be handled on a case-by-case basis and not as a ban that stereotypes and discriminates against an entire group of people. Lawmakers should step in to reaffirm through legislation that national security regulation can be done right, and constitutionally. In the meantime, the courts should strike down this order as unconstitutional in its entirety.*

*Correction, Jan. 30, 2017: Due to an editing error, this article originally misstated that the report had been published in the Boston University Law Review. (Return.)