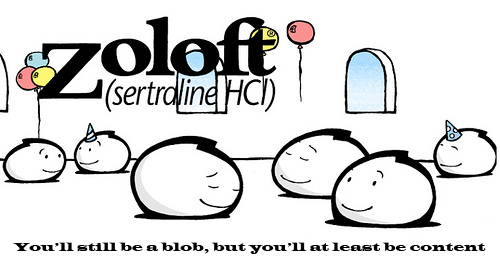 Tags: In your mind

Depression Is Complicated published by Tylenol with MDMA
Writer Rating: 2.7500
Posted on 2017-04-07
Writer Description: For when you have pain in both your body and soul. Directions: Take two, and call me a few hours later to talk about how we don't hang out enough
This writer has written 9 articles.

Depression has been in the spotlight for a good while now. It’s good that there’s awareness and attention so people may be able to recognize the symptoms and reach out for help before it starts to become a severe problem. However, people don’t seem to fully understand what depression is, while simultaneously knowing that there’s a definite fix. There are commercials for antidepressants now, so if you’re feeling like you’ve been turned into an amorphous sad blob, there’s a pill for that.

What is depression? The typical symptoms according to WebMD are:

You might not have all of these. Doctors call it "major depression" if you have at least 5 of these symptoms for at least 2 weeks. People with major depression might also have other physical symptoms, such as pain or other illnesses that get worse, stomachaches, headaches, or digestive problems. (WebMD Staff, 2016)

If you present with these symptoms, you have depression. Or PSTD. Or BiPolar. Or are just having a very bad week/month/life. Or you have a brain tumor. Or Sleep Apnea. Or Side Effects from your seizure medication. And so on. So maybe defining it by its obvious symptoms may not be the best route.

How about we define depression biologically? When you have depression, it’s believed that you have lower levels of neurotransmitters like serotonin and dopamine in your brain. Both chemicals are required for a sense of well-being, so if someone doesn’t feel good it must be a lack of these chemicals. While this is an interesting idea, and an idea that I clung to for a long time, it’s not nearly as helpful as it sounds. Are the lack of neurotransmitters the cause of depression, or are they a reflection of someone with a depressed mindset. If they’re the cause, antidepressants should be the perfect solution. Antidepressants can do a damn good job, but then why is there an increased suicide risk? Shouldn’t the person be less likely to commit suicide when their levels are returned to ‘normal’?

If you subscribe to the idea that depression lowers the levels of these neurotransmitters, you’re treating the emergent symptoms but doesn’t help with the thinking process that caused the decrease in the first place. It may give them more energy to act on self-destructive impulses, which is why there’s the black box warning on antidepressants. If you tell yourself every morning you’re worthless, no pill is going to alter this routine. It’s easy to view antidepressants as cures, but antidepressants are not antibiotics for the mind.

Something that’s very peculiar is that less intense forms of depression respond to placebos. It seems that by thinking that the sugar pills you’re taking are going to make you feel better, you get into a better mindset and your neurotransmitter levels can increase. When people preach about the power of positive thinking, they’re not wrong in many cases. In my own facility, I haven’t been able to get my administrators permission yet, but I want to set up a secret stash in my desk of candy that looks like pills. So when I have clients complaining about depression and anxiety acting up and they don’t want to go to group, I can offer them a pill that’ll make it more tolerable. I’m willing to bet good money that this would be successful.

To truly understand depression, you need to look at the symptoms, the chemistry, and the mindset of the person suffering. You need to look at what’s going on in someone’s life. Being depressed, and having depression are two different monsters. If someone can’t get out of bed, is it because they physically don’t have the energy to, or don’t see a reason to. Why did someone stop doing what they loved? Are they not doing it because they can’t, or they won’t? These are very important questions.

Depression is needlessly complicated, and it’s a bitch to deal with. There’s no one size fit all explanation or treatment, the only universal fact is that whoever is suffering from it is the one responsible for battling it. Anyone who suffers it and doesn’t want to wallow needs to try different things until something works. Exercise. Medication. Electro-convulsive therapy. Traditional therapy.

Treatment could be compared to a Sherpa. They can help you down the path to recovery, but you still need to walk it.