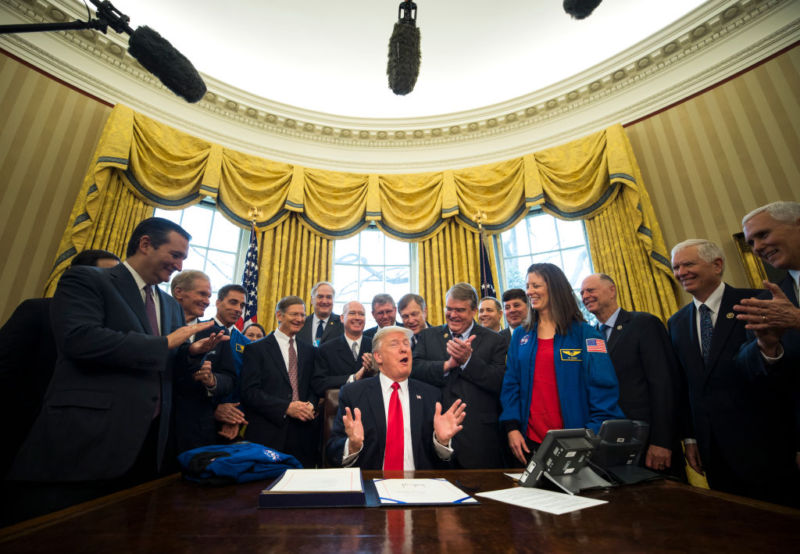 Prior to Tuesday morning, President Donald Trump had made only a few passing references to space during the first two months of his administration. That changed during a signing ceremony for S.422, NASA's first authorization act in seven years. "Today, we're taking the initial steps toward a bold and bright new future for American spaceflight," the president said.

For all of the pomp associated with its passage, the authorization act seems like a relatively inconsequential document. It keeps NASA more or less on the same course it has been on, providing funding for large programs like the Space Launch System rocket and the Orion spacecraft, but not pairing the money with a clear mandate (and the extra funding) needed to use these vehicles for a meaningful exploration program.

What was notable about Tuesday's bill signing ceremony, however, was the glimpse it provided into Trump's view of the space program. Twice, during the short ceremony, he mentioned jobs. In reading from prepared remarks, he noted that the bill addresses NASA's human exploration, space science, and technology goals. "We support jobs," the president added. "It's about jobs also."

Later, in thanking Congress for passing the authorization bill, he praised senators' and representatives' states like Texas, Florida, and Alabama that house key NASA centers. "They've done a great service for the country and for their communities," Trump said of those assembled. "It's a lot of jobs, and these are great jobs," he added.

One of the biggest criticisms of NASA in recent decades is that the agency has become a "jobs program," namely that Congress is more interested in preserving civil servant and contractor jobs in representatives' home states and districts than in advancing the nation's exploration goals. This seemed particularly clear with the Space Launch System rocket, which was designed by Congress, in part, to keep major aerospace contractors working on rocket building after the space shuttle program ended.

Part of the role of a president, when it comes to US spaceflight policy, is to stand above parochial Congressional politics in order to safeguard the nation's overall interests in space. But Trump gave little indication that he's interested in doing this—or that he's at all interested in space. After Rep. John Culberson (R-Texas) said the bill would allow Trump to become the "father of the interplanetary highway system" because of the large rocket NASA is building, the president didn't seem impressed about the potential of sending humans to Mars or robotic probes to Europa.