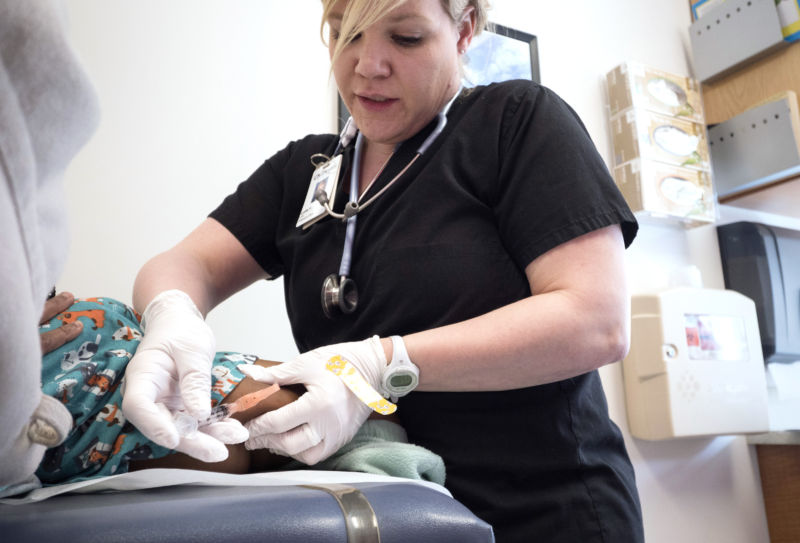 Minnesota is experiencing its largest measles outbreak since the 1990s following a targeted and intense effort by anti-vaccine groups there to spread the false belief that vaccinations cause autism.

As of Thursday, health officials reported 41 confirmed cases, nearly all unvaccinated children from a Somali immigrant community in Hennepin County. The community has for years been a target of anti-vaccine groups, aided by Andrew Wakefield, a fraudulent former physician.

In the early 2000s, the large Somali immigrant population had high vaccination rates. But in 2008, fear that their children were suffering from higher rates of autism swept through the community. Though research later concluded that autism rates were not unusually high in the community, anti-vaccination activists pounced on the panic. The activists held community meetings and invited Wakefield to visit with scared families. Vaccination rates dropped from 92 percent in 2004 to 42 percent in 2014.

Wakefield, a former British doctor who now lives in Texas, is considered the founder of the modern anti-vaccination movement. In 2010, around the time he was visiting the Somali community, he was stripped of his British medical license for falsifying a 1998 study. The study erroneously alleged that the measles, mumps, and rubella (MMR) vaccine caused autism. Wakefield was paid to produce the study to aid a money-making legal scheme, which ultimately failed. The study was retracted, and Wakefield was also found guilty of dozens of other counts of professional misconduct, including abusing autistic children.

Despite the shocking misconduct and retraction, the harmful belief that life-saving vaccines cause autism lives on.

In a presentation Sunday night to the Somali community, anti-vaccine activist Mark Blaxill played up the threat of autism while glossing over the real risk of measles, The Washington Post reports. “When you hear people from the state public health department saying there is no risk, that [vaccines] are safe, this is the sort of thing that should cause you to be skeptical” Blaxill said.

Health experts in the community have looked on with shock and horror. During some meetings, they were barred from attending.

“It’s remarkable to come in and talk to a population that’s vulnerable and marginalized and who doesn’t necessarily have the capacity for advocacy for themselves, and to take advantage of that,” Siman Nuurali, a Somali American clinician who coordinates the care of medically complex patients at Children’s Hospitals and Clinics of Minnesota, told the Post. “It’s abhorrent.”

Measles is a highly contagious viral infection that generally causes fever, cough, a runny nose, and a rash. About a third of cases develop complications, including diarrhea, blindness, inflammation of the brain, and pneumonia. In rare instances, it can be fatal. The Centers for Disease Control and Prevention recommend children get a dose of MMR vaccine between 12 and 15 months, then again between ages 4 and 6. The vaccine is very safe and effective, with two doses being 97 percent effective at preventing infection.