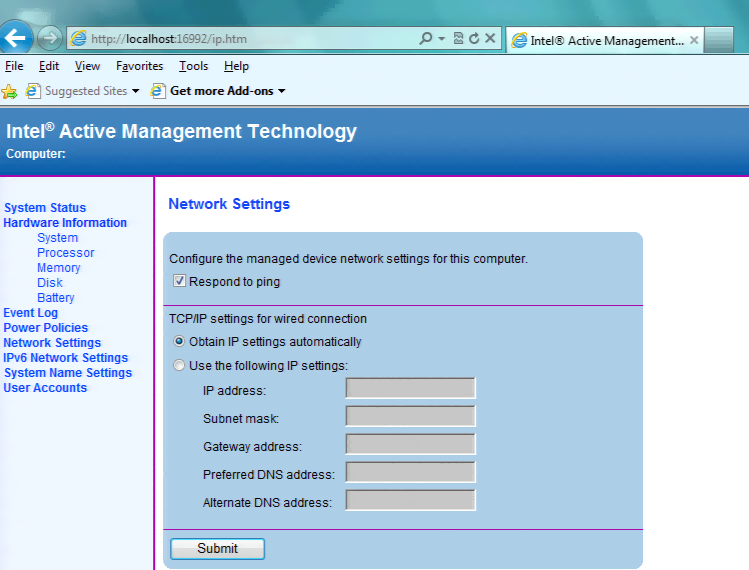 The hijacking flaw that lurked in Intel chips is worse than anyone thought published by nherting
Writer Rating: 2.6364
Posted on 2017-05-06
Writer Description: current events
This writer has written 195 articles.

A remote hijacking flaw that lurked in Intel chips for seven years was more severe than many people imagined, because it allowed hackers to remotely gain administrative control over huge fleets of computers without entering a password. This is according to technical analyses published Friday.

The authentication bypass vulnerability resides in a feature known as Active Management Technology. AMT, as it's usually called, allows system administrators to perform a variety of powerful tasks over a remote connection. Among the capabilities: changing the code that boots up computers, accessing the computer's mouse, keyboard, and monitor, loading and executing programs, and remotely powering on computers that are turned off. In short, AMT makes it possible to log into a computer and exercise the same control enjoyed by administrators with physical access.

AMT, which is available with many vPro processors, was set up to require a password before it could be remotely accessed over a Web browser interface. But, remarkably, that authentication mechanism can be bypassed by entering any text string—or no text at all. According to a blog post published Friday by Tenable Network Security, the cryptographic hash that the interface's digest access authentication requires to verify someone is authorized to log in can be anything at all, including no string at all.

"Authentication still worked" even when the wrong hash was entered, Tenable Director of Reverse Engineering Carlos Perez wrote. "We had discovered a complete bypass of the authentication scheme."

Making matters worse, unauthorized accesses typically aren't logged by the PC because AMT has direct access to the computer's network hardware. When AMT is enabled, all network packets are redirected to the Intel Management Engine and from there to the AMT. The packets bypass the OS completely. The vulnerable management features were made available in some but not all Intel chipsets starting in 2010, Embedi has said.

In a blog post published Friday, Intel officials said they expect PC makers to release a patch next week. The releases will update Intel firmware, meaning patching will require that each vulnerable chip set is reflashed. In the meantime, Intel is urging customers to download and run this discovery tool to diagnose potentially vulnerable computers. Systems that test positive should be temporarily secured using this mitigation guide until a patch is supplied. Computer makers Fujitsu, HP, and Lenovo, have also issued advisories for specific models they sell.