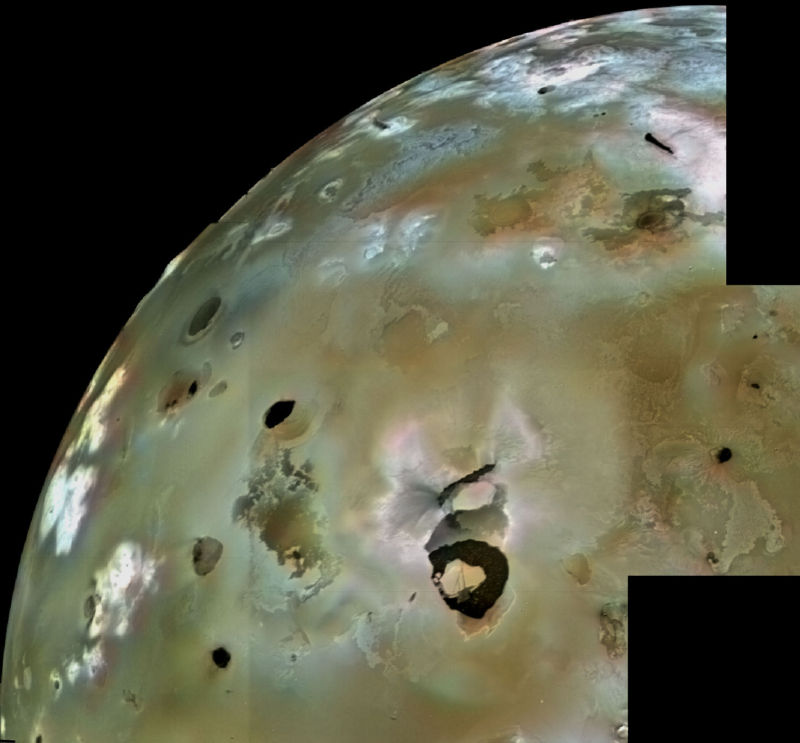 Volcanic activity appears to be a common feature in our Solar System; we have evidence of it on three planets and two moons and hints of it elsewhere. But that doesn't mean all volcanic activity is the same. Venus' activity is driven by a simple version of plate tectonics. On the Moon, massive lava flows were released by large impacts, and Mars just seems to have vented heat left over from its formation. There are also hints of cryovolcanoes, which belch up ice rather than lava, on some of the bodies of the outer Solar System.

But when it comes to sheer volume of activity, all of this takes a back seat to Jupiter's moon Io. Io is partially molten due to gravitational stress from its proximity to three large moons and a massive planet. The results are active volcanoes and vast pools of molten material on the moon's surface. And we just got a good look inside the biggest of them.

Loki Patera is the most powerful active volcano in the Solar System. It's an enormous crater with a central island; around that island is a sea of hot material that covers more than 20,000 square kilometers. By all appearances, that hot material isn't stable, since the entire surface seems to be reworked every few years, temporarily replaced by new hot material.

Unfortunately, we haven't gotten a good view of the process, instead being limited to erratic snapshots from the Voyagers, the Galileo orbiter, and various telescopes. But now, a team of US-based researchers has figured out how to get a high-resolution view of the resurfacing process using an Earth-based telescope. And it involved using another one of Jupiter's moons, Europa.

In March of 2015, Europa passed in front of Io from the Earth's perspective, obscuring it and Loki Patera over the course of about four minutes. But the process was gradual, with the edge of Europa partially obscuring the volcano both on the way in and on the way out. By rapidly capturing infrared images (one every 120 milliseconds), the team was able to catch Loki Patera with different-sized slices obscured by Europa.

The speed of imaging meant that the amount of Io obscured in consecutive images differed by only two kilometers. So while we can't possibly image features with that resolution from Earth, we could reconstruct them based on their disappearance and reappearance from the stack of images.

The wavelength used gave a measure of the amount of heat being radiated out by the surface of Loki Patera. This, in turn, provided a measure of the age of the surface, since the material there will gradually cool as it's exposed to space (Io's atmosphere is far too tenuous to retain much heat).

This analysis revealed two waves moving across the surface of Loki Patera, both starting in the west near where the central island touches the crater wall. One moves clockwise through the north, traveling at about a kilometer a day, replacing the old cool surface with new hot material. The second does the same, but moving counter-clockwise through the south and advancing twice as fast. The authors estimate that the hottest part of the two waves, where molten material had reached the surface, had just joined in the east about 75 days prior to their observations.