Rise of the US police state 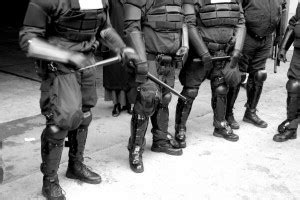 Rise of the US police state published by DCVoter
Writer Rating: 0
Posted on 2019-03-10
Writer Description: Freedom
This writer has written 1 articles.

The US used to love personal responsibility, freedom, morality, peace, and balanced budgets.

Americans who were taught to love freedom may have felt uneasy 35 years ago when DUI laws, DWI checkpoints, seatbelt laws, and car liability insurance laws were started, but most people felt that the experts must be right.

Some Americans may have felt that rewarding criminal bankers with billion dollar bailouts instead of jailing them was strange when the economy collapsed in 2008.

Now that Trump has clearly shown that he won't end the wars, pay off the debt, or restore the Bill of Rights, patriotic Americans cannot help feeling that all hope is lost.

Since the USA is a total police state, Americans are finding out that changing anything is impossible and that freedom is lost forever.

Maybe the worst part of the American collapse is learning that no one cares.

Anyone who supports endless wars, debt, and tyranny is considered to be normal and any American who loves peace, balanced budgets, and freedom is called a nutjob.

Americans have lost all touch with reality.

Americans do not know history and do not understand unintended consequences.

Anyone who is concerned about debt will be told that you can print money forever.

Anyone who is worried about tyranny will be told that the police state does not apply to white people.

Anyone who mentions US wars will be told that the USA is just killing sand niggers.

The US deserves everything coming to it.

The whole country seems to be committing suicide.