Pursuing Truth in an Age of Deceit 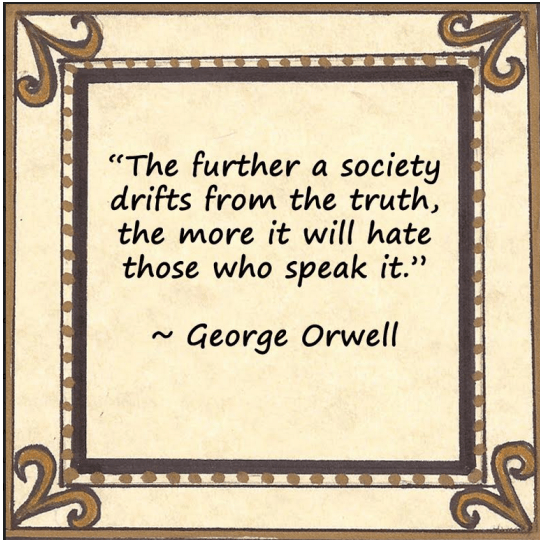 Pursuing Truth in an Age of Deceit published by Maura4u
Writer Rating: 5.0000
Posted on 2019-03-27
Writer Description: Happiness, Self Leadership and a Better Society
This writer has written 52 articles.

“The further a society drifts from the truth, the more it will hate those who speak it.” ~ George Orwell

George Orwell, famed author of 1984, the seminal tale of “Big Brother” and controlled group think, is speaking to us anew from his grave. The fictional account he released in 1949 of a future society dominated by propaganda, perpetual war and extreme personal surveillance has increasingly become our reality — even if arriving decades later than imagined.

I’m dating myself here for purposes of illustration because I well remember the Cold War era when Americans prided themselves on freedom of thought, speech and an open press.  The ability to debate, dissent and disagree was proudly heralded as part of our American heritage. We valued our history, our founding documents and our broad-minded culture.  We considered ourselves the “lucky” ones, free from government entities like KGB and Pravda, the surveillance and media control keystones of the former Soviet Union’s communist regime.

Anyone even mildly aware of today’s political and social climate recognizes that things have changed dramatically. Truth as a fundamental value has now morphed. In many sectors, it’s regarded with a certain wariness. “Truthers,” a new word describing those who question or doubt generally accepted accounts of events, are considered odd, suspect or even dangerous to society.

A Truther from Way Back

I can think of several times in my own life when I questioned accepted accounts of reality, beginning with the notion of Santa Clause. How one guy could know what every child in the world wanted for Christmas and deliver all those presents in just one evening never made sense to me.

I remember searching diligently for answers, becoming increasingly frustrated and ultimately discovering Christmas presents hidden in my grandmother’s closet. Finally! I had answered my own doubts and proved the truth about this whole Santa Clause folly!

Finding those hidden presents vindicated my curiosity and satisfied my intellect, but it also marked a sad ending to childhood imaginations.

Not surprisingly, in discovering one single one truth about the Santa Clause hoax, I was able to discern and apply truth elsewhere.

“I guess that means that the Tooth Fairy and Easter Bunny aren’t real, either,” I exclaimed to my mother.

Though disappointed to learn that the magic of Santa Clause would no longer be part my Christmas holiday celebrations, my desire to discover the “Truth” — and thereby understand the bigger world in general — was of greater import.

That same desire to know the truth has continued with me throughout life.

Often, when my own mind was unable to reconcile information or commonly proffered belief systems, I’ve asked for clarity, proof or consistency of thought.

For example, during freshman year in high school, I was tasked with researching the Dead Sea Scrolls, a major archaeological find unearthed in Qumran. Some of these ancient texts were at odds with the Roman Catholic doctrine I had been taught, so I inquired with our local monsignor about when the Vatican would amend their doctrines to align with these new religious findings.

The priest quietly acknowledged the authenticity of the scrolls but also signaled that no plans would be in effect to change established Catholic doctrines.

This was another disappointing revelation to me as it injured my beliefs about a religion I was told spoke directly for God on earth. Still, it wizened me to the greater ways of the institutionalized world.

I’ve had many other experiences in my pursuit of truth. Despite some devastating effects they had on my prior view of the world, each step I took helped me better understand human nature: I grew to perceive personal motivations and gained insights into greater social control mechanisms.

In the late 1990’s, Dick Chaney was stomping the country in a bid for U.S. President and I was anxious to hear him speak. For close to an hour, I listened as he bemoaned and criticized the Clinton administration. The charge was that Clinton, a Democrat, had orchestrated a perilous reduction of America’s military personnel, ammunition and readiness. If elected, Chaney promised the audience he’d bolster U.S. military’s might again.

Following the presentation, he opened the floor for questions. When my turn to speak arrived, I was anxious to ask this future Vice President how concerned he’d been when learning that Mikhail Gorbachev, former leader of the Soviet Union, had been overseeing the dismantling of our U.S. military.

“Mr. Chaney,” I responded, “I, too, was troubled when I first heard that the leader of our former U.S. nemesis has been installed to oversee the reduction of our military from the Presidio in California. I didn’t believe the claim. But I continued to inquire, two people I know from the intelligence community verified this information. They advised me that Gorbachev’s role is ‘public’ information but remains ‘not publicized’ by the press.”

Clearly uncomfortable, Mr. Chaney took off his glasses, fiddled with a cloth to clean the lenses, then offered a vague response that made no sense at all.

When several hands went up in the audience to ask follow-up questions and learn more about this odd informational disclosure, Mr. Chaney turned to whisper to a man standing beside him. The individual quickly assumed the microphone and announced that Mr. Chaney’s Q and A session, and the evening, were presently coming to a close.

That night marked yet another disappointment in my pursuit of truth.  A man hoping to occupy the highest office in the land didn’t want to tackle an issue focusing on the heart of his campaign promise.

The “truth” I discerned from that evening is that politicians enjoy promoting ideals to prospective voters. However, certain information remains purposely excluded from the press and, therefore, outside the realm of public debate. Gorbachev might have been presiding over the dismantling of our U.S. military, but he’d been welcomed during both Democrat and Republican administrations.

Further light that dawned on me is that while regular folk vociferously argue party politics at street level, unseen interests can operate beyond the public view involving members of both parties who work in tandem.

A Podcast for Stepping into Truth

Anyone who follows my blogs or who has heard me speak knows I advocate for everyone. Readers also know that I’m a proponent of critical thinking for its capacity to help us to grow in knowledge; harmonize our thoughts and value systems; and ultimately live a happier and more authentic life.

If you are pursuing truth, and want to live in a way that brings peace, harmony and light to your life, here’s my latest podcast. In it, I share personal experiences from both sides of the political aisle — plus a unique story behind it.

Consider where and how you’re expending your energies and then focus yourself on something you can positively promote!

Click here for Podcast 145: Are You For or Against?