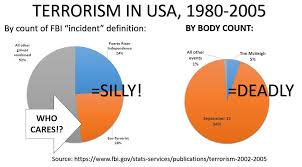 All of the extremist killings in the US in 2018 had links to left-wing extremism according to new published by Oan
Writer Rating: 2.0000
Posted on 2019-04-25
Writer Description: Articles
This writer has written 118 articles.

• The report's findings are consistent with other fairly recent studies on extremism in the US  which have shown  left-wing extremism and violence are on the rise.

Every extremist killing in the US in 2018 had a link to a  left-wing extremism  according to a new report from  Center on Extremism.

We’ve seen left-wing riots in cities from coast to coast.

This is all so absurd it’s hard to attribute the report to anything other than an ideologically motivated effort to mislead. First why start the death toll after September 11? Do American casualty lists for World War II not include the thousands who died at Pearl Harbor before Roosevelt declared war? Include September 11 and you understand that the actual and potential toll from terrorists simply dwarfs the domestic terror threat from left or right.

Consider what has happened since 9/11. The United States military mobilized and invaded Afghanistan to deny al-Qaeda a safe haven. It’s been fighting there ever since at a cost of thousands of lives and tens of thousands of often-dreadful injuries. Terrorists have proven capable of taking and holding cities on their home turf striking in the great capital cities of Europe and hitting us at home. Beyond our military actions we poured hundreds of billions of dollars into a vast international and domestic security apparatus that monitors and seeks to control the jihadist threat. Yet even when its foreign safe havens are under siege even when America has an unprecedented level of resources directed at homeland security and even when the Muslim population is a very small part of the American whole jihadists still claim more lives than any other terrorist movement.

Next even the data about right-wing terror are a bit odd. For example the two deadliest domestic right-wing terror attacks the GAO lists are Dylann Roof’s June 2015 Charleston church massacre and Christopher Harper-Mercer’s shooting spree at Umpqua Community College. Both men claimed nine victims and Roof’s attack was unquestionably an act of race-motivated terror. But what about Harper-Mercer? The GAO calls him a “ right winger” but Harper-Mercer was a black man who hated organized religion was frustrated that he didn’t have a girlfriend and was fascinated by the fame of mass shooters. How is that clearly “far right” violence?

Moreover the GAO report purports to chronicle “Violent Extremist Attacks in the United States That Resulted in Fatalities September 12 2001 to December 31 2016” but it omits left-wing violence entirely. It paints domestic terror as exclusively right-wing or jihadist. Yet this is plainly wrong and it doesn’t take a government study to prove it. It just takes five minutes of research. The report does not include for example the following well-known incidents:

The shooting of the congressional baseball game.

Those three incidents are far from the only cases of deadly leftist anti-police violence. In fact an internal FBI report indicated that “an anti-police wave following the 2014 police shooting death of Michael Brown in Ferguson Mo. l drove most of those accused of killing law enforcement.” In fact in 2016 ambush killings of police hit a 20-year high.

Why is it so hard for the media to tell the truth? Why is it so hard to acknowledge the facts that stare us all in the face? At home while it’s nowhere near as violent as it was during the depths of the late 1960s and early 1970s extremists on both sides have killed their enemies. We’ve seen left-wing riots in cities from coast to coast. Alt-right “proud boys” Nazis and neo-Confederates are instigating wild and vicious street melees. One of them even rammed his car into a group of innocent protesters. Violent extremists left and right threaten American lives. Yet neither group is as dangerous as jihadist terrorists.

Given all these threats it’s vital that Americans shed the temptation to “fit” any new violent act into their partisan narrative. Now’s the time rather to stand first for the