The American Left Are Idiots: OR: You Learn Something Every Day--Here’s a Lesson on Sumo Wrestling 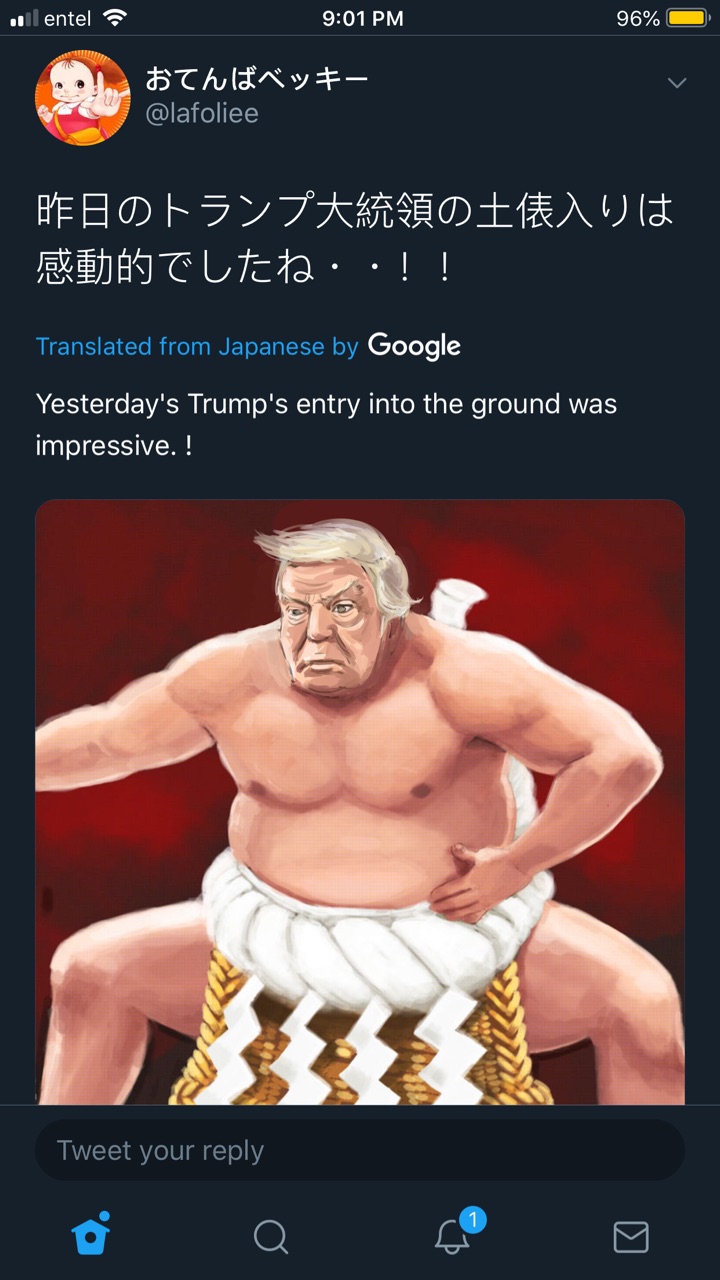 The American left is, to borrow a phrase from President Trump, “so sad”. After a very successful state visit to Japan, a Japanese agency posted the meme above depicting President Trump on Twitter.

American lefties thought the Japanese were making fun of President Trump and howled with laughter at the “diaper” which they associated with the crude diapered balloon the "nasty" Brits have put on display during two protests. They cheered the Japanese on in what they saw as an entire country “dissing” President Trump and therefore agreeing with their opinion of him.

After futbol, Sumo wrestling is my favorite sport to watch. It is as elegant as it is fierce. Fast, furious–intense–it is the ultimate sport.

Sumo, which means "to compete" is thought to orignate from the Tumulus period (250-550) and was originally much more violent and performed as an entertainment for the gods. In the 16th century safety rules and tournaments had been introduced and the Sumotori or Rikishi (wrestler) were given special priviledges, stipends, patronages, and ranking. Sumo wrestling was historically practiced along with the martial arts and is closely linked to the Shinto religion--a short history of Sumo Wrestling can be found here.

While most Sumo wrestlers are Japanese, many non-Japanese have taken up Sumo and been accepted into the discipline--however, Japanese spectators claim they can tell when a wrestler is foreign due to their "immodest demeanor" in a country where great humility is valued.

Takanoyama Shuntaro is a Czech wrestler that had a huge following in Japan. While he was tall, strong, and very skilled he never ascended to the top levels of Sumo. Watching a few of his best matches you can see his Judo background coming through in his throws. Pacific Islanders have risen to great heights in Sumo–Mark Tanu of New Zealand and my personal favorite, Samoan Konishiki–seen here in an epic match against Kotoinazuma. And here in this epic match between with Akebono–one of my all-time favorite Sumo.

There has been some resistance against foreigners competing in Sumo–in particular the Mongolians as they have slowly began to dominate the sport--much the same way men competing as women have come to dominate women's sports. Here is a bit of history on the Mongolian dominance of Sumo.

In Mongolia, the land of Ghenghis Khan, wrestling, or "Bokh", is a 2,000-year-old tradition and national sport. The men wrestle locally and compete annually at national tournaments.

Sumo wrestlers have to eat a lot to maintain their fighting weight. At least 10,000 calories a day! The sumō heya (training stable) is where keiko (daily practice) takes place with stable-masters (coaches), and wrestlers live together communally. This is the daily routine at the Takadagawa training stable in Tokyo’s Kiyosumi-Shirakawa district.

Official Sumo competitions take place six times a year and the professional form is called Grand Sumo which is regulated by the Japan Sumo Assocation (JSA). The fighting ring is called Dohyou and is covered in sand. A new Dohyou is made for every match. It is circular, 15ft. in diameter and sits two and a half feet above the ground. The gyoji (referee) is revered as a priest and wears traditional robes during competitions. Before the sumo match begins, the Yokozuna (grand champion) performs the leg stomping shiko ceremony and makes noise so as to drive "evil spirits" away.The "evil spirits" are considered any thoughts and emotions that may act as distractions and take the sumo's attention away from the present.

The origin of all demons is in mind itself. When awareness holds on and embraces any outer object, it is in the hold of a demon--Machig Labdrön, 11th century Tibetan Yogani

Each match has five judges who may object to an decision the referee makes. If there is an objection the referee will review an instant replay and decide wether or not the judge's objection was valid. Sumo wrestling is not plagued by a lot of rules. The first rule is that at no time may any part of a wrestler's body except for his feet come into contact with the ground, and secondly the wrestler must ensure that he is not thrown from the ring by his opponent. The loser is the first one to break either of those rules.

Philisophically Sumo is the battle with ones self--the internal struggle between the part of the higher self that strives for awakening, and the lower self which is in need of purification.

Mind wrestles with mind--our minds with the mind of the enemy--Silouan the Athonite in The Philokalia. The conflict between good and evil or purity and pollution is a core belief and function of the Shinto religion.

Japan honored President Trump by depicting him as a Sumo. The "people" crowing in glee on Twitter, were quite honestly showing their ignorance of other cultures via their blind hatred of him. Those suffering from Trump Derrangement Syndrome are the ugliest of Ugly Americans.