The Triumvirate of Madness 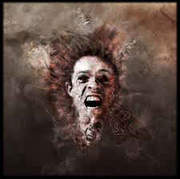 When one speaks of madness, a plethora of different examples could be the center point, whether it's schizophrenia or psychosis to stuntmen or scientists. There are certain patterns, though, that can help in categorizing these different situations into their own categories. While it would be difficult to divide into specific groups without only having one or two per group, madness can be organised into three distinct subnets:

The subset of plagues can be stated as a category for the madness that has ill effects on the mental health of the subject. Mental diseases and disorders, such as shcizophrenia and psychosis, inflict the brain negatively, causing the health of the subject in question to deteriorate, and as such, is the most dangerous subset of the three. However, it is also identified in that it can be treated through therapy, drugs, physical activity, etc., helping the individual function normally in society without the hurtful outcomes of this type of insanity.

This subset, known as innovaters, is the madness brought upon and giving life to ingenuity. Such insanity is brought upon in either short spouts, giving the innovater that eureka moment for an idea so crazy that it might just work, or in long sessions of endless working and tweaking, modifying it here and there, in order to finally get the perfect model of the idea planted in the subject's head, no matter if it's physics and or aerodynamics to philosophy or mathematics. The only pitfall to this subgroup is that it is confused easily with the next subset.

This subset is summarized quite neatly in a quote attributed to Albert Einstein, "Insanity is when you do something over and over and expect a different outcome." The madness associated is that of either, as stated earlier, repeating an action over and over again and expecting something to change, or of doing a completely stupid action as if it was a good idea, such as jumping into a frozen lake, or running into oncoming traffic for the hell of it.This type of insanity can, however, be easily confused with that of the innovaters, as they both share very similar traits, leading people to see either innovaters as idiots or idiots as innovaters.

These subcategories include a bulk of what their is to know about insanity, holding in almost all different types of madness that we might identify. It is not, however, totally clean cut, as there may be examples of insanity that do not fit any of the three subgroups. All in all, the use of these subnets can play a part in how we identify the different types of madness in others, and the impact they have on how we view an individual inflicted with it. The only question that remains now, is if we will be able to identify our own insanity that we have in the depths of our conscious and unconscious mind through this triumvirate of madness.