Something Is Going Seriously Wrong at Arizona Polls Today 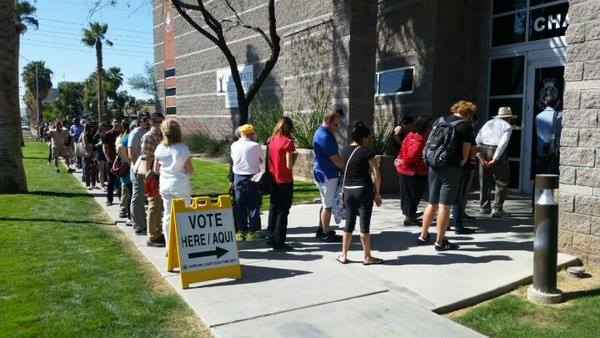 Arizona’s primaries aren’t even done yet, and there’s already legal action being taken as a result of incompetence or possibly even intentional sabotage.

Leaders from the Arizona branch of the Democratic Party have confirmed that its lawyers are officially making an inquiry after multiple Democratic voters showed up to the polls only to find that they were listed as independents, Republicans, or had no party affiliation at all.

Many voters wound up having to wait in line under the hot Arizona sun only to find that they were ineligible to vote for the candidates of their choice. To add insult to injury, the polling locations have been so poorly planned that many voters had to wait in line up to four hours before finding out that their information had been improperly filed.

Joe Dana, a reporter with 12 News in Phoenix, tweeted that despite 500,000 more primary voters in 2016 than 2012, Maricopa County polling places had dwindled considerably for this election.

Poll workers have been giving out “provisional ballots,” according to 12 News. It’s unclear at this time as to whether these ballots will actually count in the Arizona primary, and whether intentional or not, it could result in the disenfranchisement of Arizona voters. Some frustrated residents are taking to YouTube and social media to voice their frustrations.