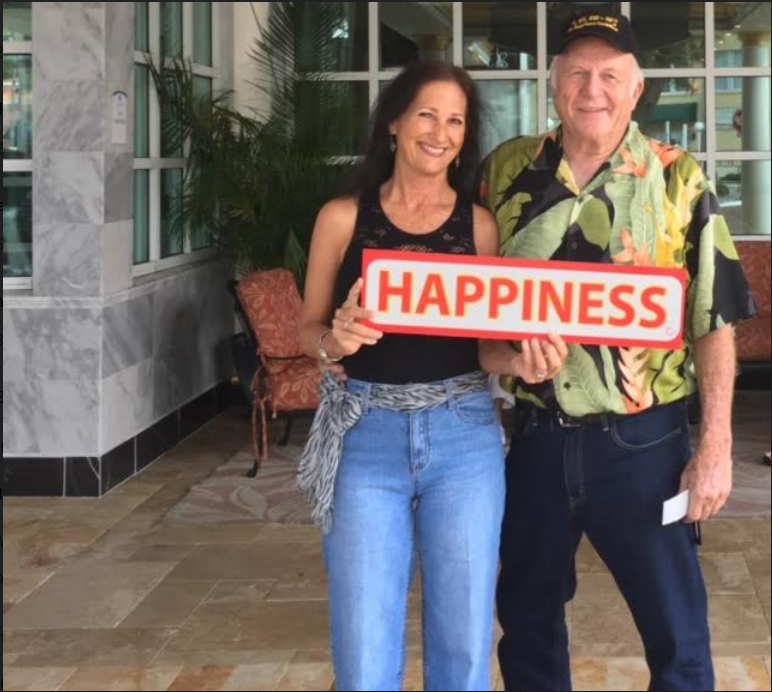 Chatting Up Happiness with Happiness Guy Gary King published by Maura4u
Writer Rating: 5.0000
Posted on 2020-02-13
Writer Description: Happiness, Self Leadership and a Better Society
This writer has written 56 articles.

Is it possible to look at the word HAPPINESS and not feel just a tad bit better? Well, there just happens to be a guy who’s conducting an experiment to that end.

It wasn’t by chance that I spotted a random photo scroll along my Facebook feed. The image was guy pictured above standing in front of one of his Happiness signs. Apparently, he’d been posting these signs on popular roads in St. Petersburg, Florida and the photos were going viral.

Who is this “Happiness Guy?” I wondered, and why hadn’t we ever crossed paths here in Tampa Bay?

I immediately reached out to friend him and less than a week later, we spent a few hours over coffee discussing our common passion: the “serious” — and powerful — subject of happiness.

Happiness Isn’t for the Fainthearted

Most people equate happiness with the airy, the vacuous, even the superficial. For them, it’s a topic reserved for the ignorant, the avoidance-based rose colored glasses crowd, or for the highly privileged. But for Gary, happiness is critical to our society and the future of humanity. He quoted a recent statistic that shows how happiness is a dwindling commodity.

“I speak around the world, mostly to high school kids, ” he informed me. “Are you aware how many are committing suicide today as a result of their cell phone?”

Though he has a computer and a website back home, he proudly pulled a relic from his pocket: the black flip phone.

“This thing doesn’t even allow me to text,” he said, feeling more than sound in his decision to have real conversations without the addictive social controls smart phones deliver.

A believer in the boiling frog theory, he’s convinced that being constantly connected to smart phone social media is hurting, rather than helping, society.

“Have you ever studied the subliminal messaging used in advertising?” he asked. “For example, movie theaters years ago experimented with inserting a single image of popcorn and Coca-Cola within their reels of coming attractions.” Nobody in the audience saw the image with their natural eyesight, but the subliminal suggestion brought a profitable return in popcorn and Coca-Cola sales to those theaters.

From Gary’s standpoint, the old notion of subliminal messaging that affected our emotions, thoughts and behaviors is currently morphing into a perniciously pandemic element in our society. “People can go through 12 years of school and yet never learn how the mind works,” he reflected. Without that knowledge and awareness, he believes smart phone social media is easily controlling us in ways we could never before have imagined.

“Every word we use has energy. Because of their energy, words can make us feel better or worse.”

He uttered the word “racism” and easily made his point. It’s a low energy, negatively inspired word I’ve addressed in the past, and for the very same reason. Continual use of the word foments feelings of isolation, depression and even anger. Too much of a negative energy word can ultimately provoke reactionary behaviors.

If the words we receive subliminally can affect our feelings and behaviors, Gary wanted to experiment with words on a directly observational level. And he wanted to conduct a social experiment — this one on a higher energy frequency.

“Can I take one obvious word and publish it? Will it make a difference?”

To do so, he created his own brightly clad Happiness signs and started posting them around town. One is posted immediately below the St. Petersburg city limit sign.

He’s created something of a sensation, not only with people taking pictures of the signs and enthusiastically sharing them among friends.

“One lady reported she was having full on road rage — and the sign changed her,” he told me. The appearance of that simple word immediately enabled her to breathe, regroup and smile, again.

Gary displays his DON’T LIE license plate, a reminder from his near death experience

The hours passed quickly as we spoke. We probed and challenged each other, compared notes and dipped into many topics outside the norm.

A fellow critical thinker and self-described divergent, Gary told me about one of his many life experiences that changed him — in a way he wasn’t prepared for. He’s incorporated the idea into his happiness experiment.

Years ago, he had an NDA (near death experience) while in a hospital bed. Looking down from above, he realized the body he was viewing below had absolutely nothing to do with him. The moment of sheer consciousness reminded him that our bodies are merely carrying cases from which to operate.

“What I didn’t expect is that by the time I awoke, I wouldn’t be able to tell a lie.”

I laughed. “That reminds me of a movie,” I told him. Hollywood had already produced Liar Liar starring Jim Carrey, and its crazy plot concluded with simple happiness and redemption.

In Gary’s real-life case, he absolutely could not tell a lie, “not even a white lie,” he confessed. Initially, it was jarring to have to be perfectly honest with everyone all the time; Gary was often pained by the “new normal” that unwittingly invaded his life experience.

Years later, he observed that the human race operates as if lies — and especially white lies — are the norm. He contends that our continuous failure to speak truth perpetuates a state of cognitive dissonance. Our soul knows what we believe to be true, but we mechanically agree or go along with external opinions to avoid potential rejection and other discomforting consequences.

That proverbial merry-go-round behavior keeps us from the ever-elusive acquisition of the Three A’s he claims we are all seeking: Acceptance, Approval and Appreciation.

Everyone Matters in Effecting Change

Rather than focusing in on problems, Gary’s too busy at present tinkering with solutions to the world’s need for happiness and a higher energy cosmos.

“Remember the story about the 100th monkey?” he told me, sharing the oft-repeated tale of how one monkey’s change of behavior on a remote island didn’t just gradually influence his local companions. “When the 100th monkey adopted the new behavior, all the other monkeys in the world did, too.”

Gary’s convinced that every positively energized word he speaks and every Happiness sign he posts will ultimately have a have a ripple effect around the world. We’re all energy creators and we can choose to spread either low vibrations or high. If there’s any veracity to the 100th Monkey theory, it doesn’t take many positively-energized people to change the world.

As for me, I’m already on the same high energy frequency as the Happiness Guy.

I hope you are, too.

To learn more about Gary King and maybe get some of his Happiness signs, find him at this website.

Interested in the power and possibilities of Truth to positively change your life? Click here for the Values book in my Art of Happiness series that focuses on my favorite value — Truth!

Hire me as your next Keynote

Engage me as your Media Guest

Subscribe to my Podcast on iTunes, Stitcher and Google Play

Enroll in my eCourse