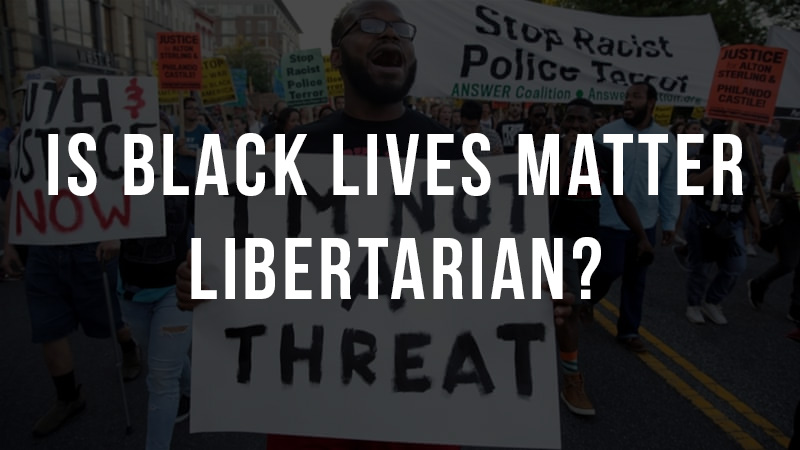 One of the recent discussions among Libertarians has been whether or not Black Lives Matter is a Libertarian thought. Which to some who listen, inherently means that the Libertarian Party is somehow "not" liberty focused but instead filled with radicals who side with inherently violent protesters. If you believe this as you read this; I write this for you.

We are a party of pro-liberty. The core tenets exist as a right to Life, Liberty, and Property which was stated plenty of times over and over throughout our founding documents. (Wait, what about "the pursuit of happiness"? "Pursuit of happiness" was added at the end of the constitution instead of property to help quell pro-slavery conservative sentiments among our founding fathers. You had a strict split of people wondering if blacks were property, which caused everyone to place "pursuit of happiness" to find an even ground when they had Reds at their doorstep. By including a "right to pursue happiness", this would include slaves an open door to become free of their shackles at the time.)

This is only compounded further as one of the main political philosophers to influence the US Constitution was John Locke who upheld the tenets of Life, Liberty and Property. This, fundamentally, are core tenets to Libertarian philosophy. We no longer have a debate as to whether or not blacks are property. Instead, we focus on every man and woman possesses these inalienable rights (which could be bestowed to you by God, or human reason, depending on your theological perspective) which are NOT defended by government, but by people alone.

In regards to BLM, it is safe to say there are questionable players who do not align with core Libertarian principles — that much is true. This, however, while considering bad actors in the struggle and plight to state oppression of blacks — sounds far more Libertarian than you might initially assume. As with any movement, you would have bad actors just as you have good cops and bad cops in your county. So what exactly does Black Lives Matter stand for? To answer this question and settle the argument as to whether or not the core principles are Libertarian, I turn to their website for guidance.

As it says straight from the https://blacklivesmatter.com/what-we-believe/ page:

"It started out as a chapter-based, member-led organization whose mission was to build local power and to intervene when violence was inflicted on Black communities by the state and vigilantes.

In the years since, we’ve committed to struggling together and to imagining and creating a world free of anti-Blackness, where every Black person has the social, economic, and political power to thrive.

Black Lives Matter began as a call to action in response to state-sanctioned violence and anti-Black racism. Our intention from the very beginning was to connect Black people from all over the world who have a shared desire for justice to act together in their communities. The impetus for that commitment was, and still is, the rampant and deliberate violence inflicted on us by the state."

The Libertarian Party comprises a mix of different thought processes which can lean from "hard anarcho-capitalism", "minarchist", or even environmental philosophies bringing in a wide range of issues that not every Libertarian concerns. This, however, we all agree to the same basic principle: "The state is far too big, and we need to do something about it." When we look at the core tenets of Black Lives Matter, it in fact, does align with Libertarianism as a primary principle after knowing what BLM fights for.

As a proud member of the Libertarian Party, I stand strong against those who would be under the boot of statism. I support those who fight fervently and passionately against social injustice, especially that of a state, to be inherently PRO-Libertarian. Should there be any questions to this long post, please feel free to leave it in the comments below and I can try to answer them as best as I can.