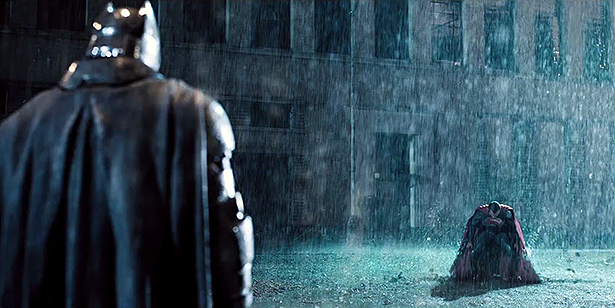 In the battle of Batman V Superman the real winner is the door marked EXIT.

Okay, okay, that’s a cheap shot. A pithy one-liner designed to make a review stand out on Rotten Tomatoes. Sensationalist and clearly a little over-the-top. If there are things wrong with Batman V Superman: Dawn Of Justice it’s probably more of a heroic failure, right? A bit of a mess but essentially an entertaining spectacle.

If you want a slightly less histrionic open to the review let’s retcon it this way. There’s a moment when it references the inscription on Christopher Wren’s tombstone in St Paul’s Cathedral: “If you seek his monument – look around you.” If you really want a monument to these two iconic DC characters, look anywhere but at the screen. Batman V Superman appears to have been made by people who not only have no love of comics but who appear to actively hate them. However, we know isn’t true – both director Zack Snyder and writer David S Goyer are fans, which just makes the colossal errors of judgement even more mystifying

(Also, there’s another irony in using that quote, in that, as with the first film, Superman spends much of the time destroying buildings not building them. Maybe this is deliberate but there’s so little sense of humour or subtlety in rest of the film it’s doubtful. And even if it is on purpose – why undermine your hero like that?)

The main problem with the film is its incoherence. (There’s a problem with it’s pomposity as well but you’ve seenMan Of Steel; you know what to expect.) Aside from a brief visual retelling of Batman’s origin, there’s little in the way of establishing the status quo of this world. There’s a messy bit of Gotham crim-kicking for Bats, nothing for Superman. He just saves Lois from some terrorists then gets in the bath with her. The grudge match is there from scene two and we never get a sense of the two as independent heroes going about their work. They exist in this movie purely to niggle each other.

Strangley, the nature of the world’s grudge against Superman is unclear, and the muddy approach is typical. Bruce Wayne hates him because he destroyed his offices in Metropolis and, indeed, trailers and pre-publicity seemed to suggest that it was the mass destruction at the end of Man Of Steel that left the rest of the world uncomfortable too. Yet we’re told time and time again he’s loved by the more credulous believers, like some godlike saviour. There is one (embarrassingly staged) scene well into the film that rams home this point, but it’s shot in such a dour, dark manner (it occurs at during the Day Of The Dead festivities so all Superman’s admirers are dressed as skeletons) that again, it sends mixed messages.

Instead it’s a baffling event in the desert of a fictional African country that apparently sparks the turn against Superman, leading to the US government setting up a senate committee to look into metahuman activities and if they need policing. Baffling because a) it feels like Superman has just turned up in an episode of Homelandand b) because what we see on screen doesn’t match what we’re being told by other characters happened. This, it turns out, THE POINT, but you keep wondering why Clark and Lois don’t seem more concerned about the damage it’s done to Superman’s reputation. Trying to work out what’s driving the Man of Steel’s decisions for the first half of the film is a thankless task. He just does what he does because… right?

This kind of lurching plot development is typical. The film feels like edited highlights of an entire season of a Netflix series. Necessary exposition – not so much for explaining the plot, as for explaining why characters act the way they do – seems to have ruthlessly expunged. And there’s a lot of plot to cover as the film struggles to introduce more metahumans, builds towards big Justice League jamboree and says hello to Lex Luther and Doomsday. The whole theme of whether Superman needs to be answerable to governments falls by the wayside when it’s outlived its plot usefulness. The script’s not just trying to herd kittens, it’s trying to herd them with machine guns, and it leaves the film in tatters.

What’s really annoying is how Batman V Superman feeds the internet snark. There was that furore over Affleck being cast as Batman. We were actually quite enthusiastic about the choice. Affleck is a fine actor. Sadly he’s given zero to work with here except a stupidly restrictive costume. Both his Bruce and Dark Knight are bland and lifeless.

There was online incredulity at Jesse Eisenberg playing Lex. It could have worked if, as it seemed, he was going to be channelling Mark Zuckerberg. Instead he does a pale impression of the Joker.

Internet pundits complained the trailer gave away too much. Nonsense, said the director, writer and producers: there are loads of things you don’t know yet. Well, there’s possibly one thing; at a stretch two. And the second one’s guessable.

Don’t you hate it when internet snark is right?

Even on the level of a fan-pleaser or popcorn action film, Batman V Superman fails. The big showdown takes ages to come and by the time it does the reason for it happening has been diluted so much that expected grudge match becomes something far less interesting. It’s also not particularly exciting (it’s from the “cut so fast you can barely make out what’s happening” school) and has a resolution so cheesy  you may audibly groan.

The cameos for the forthcoming other members of the Justice League are fun, and Gal Gadot looks like a promising Wonder Woman – her howling theme tune (if tune is the right word) is impressive too.

There are some fantastic visuals here and there. The Bruce-eye-view recreation of the events at the end of Man Of Steel work well. Wonder Woman’s tussle with Doomsday – especially when she lets loose the lasso – has a pleasingly authentic comic book feel.

But this should have been a film with the bristling conflict between Bruce and Clark, the Dark Knight and the Man Of Steel, at its heart. Instead, they spend too much time apart, with advocates pontificating about what they stand for. There’s nothing personal here. There’s a moment in the trailer for Captain America: Civil War – a film with similar themes about whether governments should place limitations on superheroes – when Cap says of Bucky, “He was my friend,” and Iron Man replies,  “So was I.” In that simple exchange there is more emotion, more humanity, more real drama than Batman V Superman achieves in its entire running time.