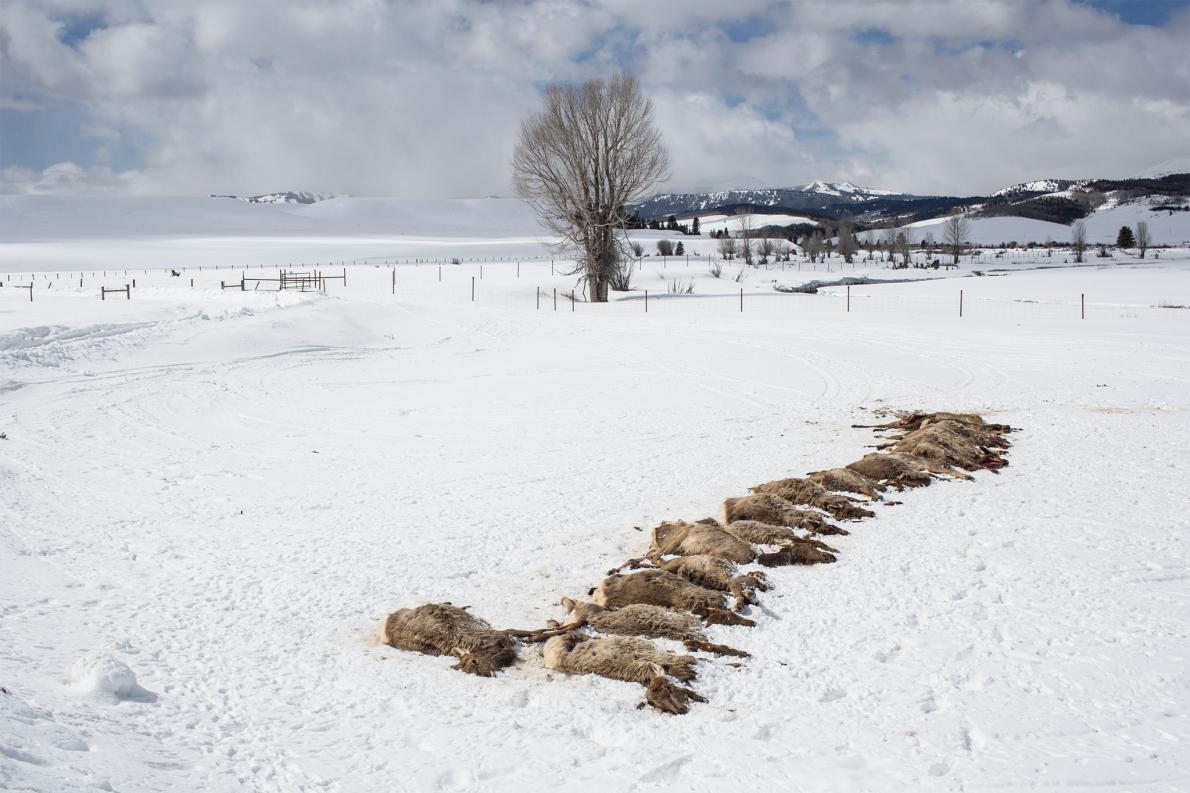 These elk were killed by wolves on the McNeel Elk Feedground near Bondurant, Wyoming, as photographed on March 25.

It's a popular saying that nothing goes to waste in nature. But occasionally, animals seem to kill for no discernable reason. (And it's not just murderous prairie dogs offing their competitors.) Foxes and wolves, among other predators, sometimes engage in surplus kills, when they take down more prey than they can likely eat.

Such a surplus kill event apparently went down in northwestern Wyoming this week, when a gray wolf pack seemingly dispensed with 19 elk in a single night.

"Normally one or two elk a night here and there is no big deal, but 19 in one night is fairly rare," Wyoming Game and Fish Department supervisor John Lund told a local TV station.

Officials think the Rim Pack of wolves were the culprits, a group thought to include nine individuals. Most of the elk killed were calves, plus two adult cows. The kill took place near Bondurant, southeast of Jackson.

"This kind of event is very rare," says Mike Jimenez, the northern Rockies wolf coordinator for the U.S. Fish and Wildlife Service, who is based in Montana. "Occasionally you see them kill five or six animals, but 19 is very unusual."

"Unlike humans, wolves do not kill for sport," writes the Idaho-based advocacy group Living With Wolves. Instead, the animals are often chased off their kills, either by other predators or by people, who often don't even realize they are approaching them.

Surplus killings tend to be most common in late winter and may actually represent an effort by wolves to cache food for later use, the group notes. The predators are known to return often to kills to snack, sometimes for weeks.

Sometimes more prey are also killed than wolves may have first intended due to the chaos of the hunt, the group adds.

But even if the elk don't get fully consumed by the pack, they will provide food for other scavengers.

Such surplus kills are unlikely to negatively effect populations of prey, says Jimenez, who adds that wolves normally prune herds by taking out sick and old animals, as well as the young. The mass kills may also be more likely on "feedgrounds," as was the case in Wyoming, where wildlife managers provide hay to elk in the winter in order to offset loss of their habitat. Officials manage 22 feedgrounds across the region, which are visited by thousands of elk.

Gray wolves have lived in the American West for an estimated 10,000 years, though they were nearly wiped out by hunting and habitat loss over the past few centuries. They have been making a slow comeback in recent years, bolstered by their reintroduction to Yellowstone National Park. While there were formerly about 2 million of the animals living in North America before Europeans arrived, roughly 5,500 live on the continent today.

Management of wolves in Wyoming has been a polarizing issue, with state officials promoting a "kill on site" policy for several years that resulted in hundreds of shootings. However, in 2014, a federal court relisted the animal under the Endangered Species Act for the state, making it again illegal to kill them. Officials found just over 300 wolves in Wyoming at the end of 2013.

"Wolves are doing well in Wyoming," Jimenez says. "Although surplus kills might not help some people's feelings of wolves, they are quite rare."