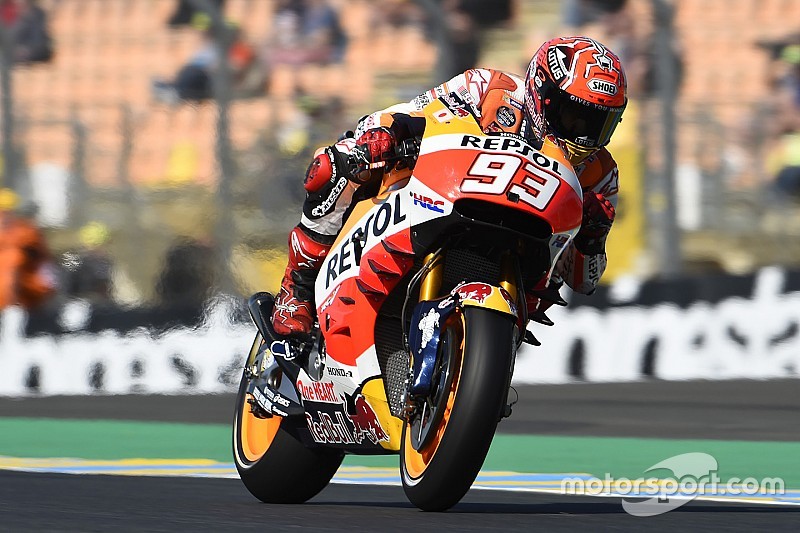 Honda's insipid performance in last weekend's Le Mans MotoGP race was the worst result for the team in eight months, and it highlighted the RC213V's deficiencies.

Honda knows that it has a big problem with acceleration, regardless of the fact that Marc Marquez had managed to hide it admirably until last weekend, at Le Mans, where the bike's shortcomings were very clear to see given the French circuit's stop-start layout.

Marquez's fall and Dani Pedrosa's fourth position meant that, overall, it was the worst result for Honda since last year's Silverstone race - a real debacle that, according to sources from the team, is a reflection of reality.

Out of the theoretical title contenders, Marquez was the only one who had not crashed yet, but in France he made a mistake when trying to stop Valentino Rossi from opening a gap. He braked a little later and harder at Turn 6, La Musee, and he lost the front end.

The circumstances of the accident are a good reflection of the moment that the most powerful manufacturer is going through: Marquez and Pedrosa are risking a lot under braking to try to make up for the time lost on corner exit due to the lack of acceleration.

And that, since Michelin's return as the championship's sole tyre supplier, is a risky practice indeed.

"The acceleration problems that we are having are worse than last year. You have to keep in mind that the engine is new, and so are the tyres and the electronics," said Pedrosa.

"We are not lacking horsepower, because in fourth, fifth and sixth gear the bike is fast. What we are missing is a way to apply the power better under acceleration, on the exit of the corners.

"In practice you think you are very fast, but you look at the time and you see that you are two or three tenths off. You don't understand it.

"But then, in the race, you are running right behind others and you see that it's not on the corner that you lose the time. It's coming out.

"When you are running alone that's hard to see. It's when you compare yourself with the rest. At the start it was almost impossible to follow the Suzuki given how much I was losing on corner exit."

"At Le Mans, the Honda wasn't working at all," said a member of the Ducati team. "Coming out of the final corner you could see how much Marc was losing, and that led to what happened in the end.

The 2015 season left a mark on Marquez, who ended up on the ground six times over the course of the year. Three of these accidents (Italy, Catalunya and Aragon) could be easily attributable to the nature of that year's Honda, which was very nervous and unforgiving.

In two (Argentina and Malaysia) he made contact with Valentino Rossi, while at Silverstone he crashed in the rain while trying to stay in touch with the Italian.

All that has led to a change in the Spaniard's mentality, as he is more aware than ever of the dangers of taking more risks than his bike allows.

"I have to keep this approach, because if I'm more aggressive I can end up with a lot of zeros," Marquez said.

Honda, meanwhile, is resigned to this state of affairs being the championship's trend, given the limitations imposed by the rules when it comes to engines, which are frozen.