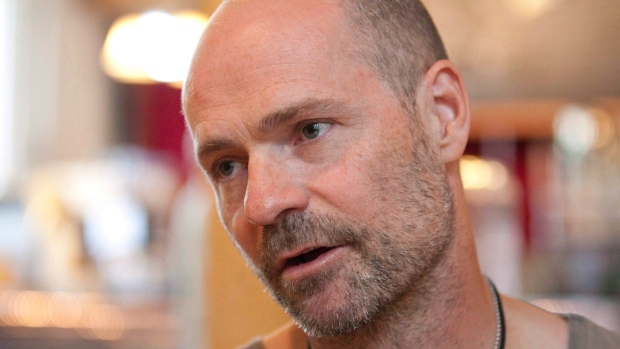 Gord Downie, the lead singer and lyricist of the iconic Canadian rock band the Tragically Hip, announced Tuesday he has terminal brain cancer, but still plans to join his bandmates of more than 30 years for a summer tour.

The band posted the news of Downie's illness on its website and the band managers released more details about it — an aggressive, incurable form of cancer called glioblastoma — at a news conference at Sunnybrook Hospital later in the day.Downie was diagnosed with the disease in December and has since undergone surgery, chemotherapy and radiation.

"Since then, obviously, he's endured a lot of difficult times, and he has been fighting hard," the band said in their letter to fans. "In privacy along with his family, and through all of this, we've been standing by him."

Despite the diagnosis, The Hip announced it will "dig deep" and hit the road together this summer. The details of that tour should be released later this week, according to the band.

"This feels like the right thing to do now, for Gord, and for all of us," group members said in their statement. "What we in The Hip receive, each time we play together, is a connection; with each other; with music and it's magic; and during the shows, a special connection with all of you, our incredible fans."

The Tragically Hip's frontman has long established himself as one of the country's greatest songwriters, his lyrics giving a voice to Canada's land, its history and, at times, its official winter sport.

"You write about what you know," he told CBC's Wendy Mesley in 2012. "And I love this country. I love my idea of this country.

"Where I go and the people I've met, underlying everything is that commitment to finding the common good."

Downie's performance has always been characterized by his energy and his dance moves. (Canadian Press)

His music has given him a chance to bear witness to that, travelling from St. John's to Attawapiskat First Nation to Vancouver since the Tragically Hip began playing the Kingston, Ont., bar scene in 1983.

That led to a record deal with MCA and the release of the self-titled 1987 EP, says the Canadian Music Hall of Fame, to which the group was inducted in 2005.

Downie's evocative lyrics didn't break out into the mainstream, however, until Up to Here, the group's first full-length album, was released in August 1989.

That album gave birth to the bluesy-rock single New Orleans is Sinking— which claimed the No. 1 spot on the Canadian content chart — and earned The Hip the first of its 14 Juno Awards. The Hip won Most Promising Group of the Year in 1990.

The next three full-length studio albums — Road Apples, Fully Completely and Day for Night — cemented the band members' reputation as commanders in the Canadian rock scene, as they quickly graduated to arena-sized venues and were so popular they regularly hosted their own outdoor festival, Another Roadside Attraction.

The Tragically Hip has won 14 Junos, including Album of the Year for Trouble at the Henhouse in 1997. (Canadian Press)

The group has been among a select few acts that could garner heavy airplay on both alternative and classic rock radio stations around the country. While Downie was adept at writing something universal like My Music at Work or more enigmatically in the case of Little Bones andLocked in the Trunk of Car, quite often the band's songs were infused with Canadiana —  the hockey anthem Fifty Mission Cap, the contemplative Bobcaygeon and Wheat Kings, in part about wrongfully convicted Manitoba native David Milgaard.

Fellow Kingston native Dan Aykroyd, former Saturday Night Live cast member, was clad in a Canada sweatshirt when he famouslyintroduced the Tragically Hip on the show in 1995 for the performance of Grace, Too and Nautical Disaster.

Downie channelled his lyricism inward on the band's 2012 album, Now for Plan A, released a year after his wife was diagnosed with breast cancer.

"The band, we rallied," Downie said in an interview on CBC's The Hourin 2012. "We're a big family and rallied around my wife, Laura, and helped her through it."

While the band has appealed to countless fans through their sound and the stories they've told through song, Downie's singular stage presence looms large.