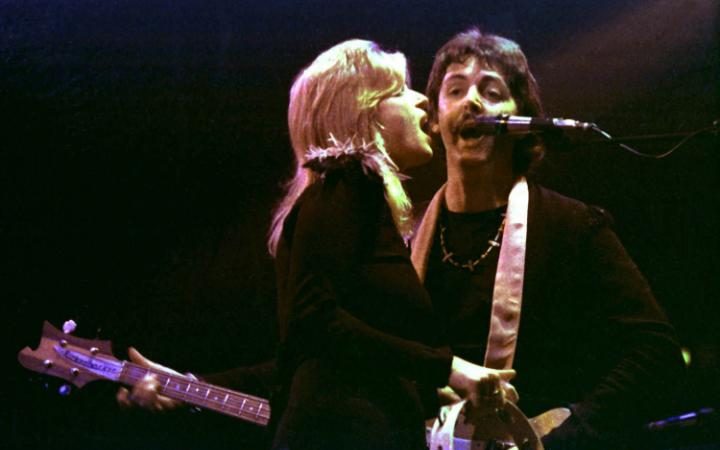 Paul McCartney has admitted that Wings was not "a good group". The band, which the former Beatle set up with his late wife Linda, had a string of hits including Mull of Kintyre and Live and Let Die and won six Grammy awards.

But despite this success, Wings have always been widely ridiculed. (They are one of Alan Partridge's favourite bands.) And now it appears that Sir Paul agrees with his critics.

Speaking to broadcaster John Wilson in front of an audience that included Brad Pitt, James Bay and Paul Weller at the BBC's Maida Vale studios, McCartney said: "We were terrible.  We weren't a good group. People said, 'Well, Linda can't play keyboards', and it was true.

"But you know, Lennon couldn't play guitar when we started. We knew Linda couldn't play, we didn't know each other, but we learned.

"We had some funny experiences. Looking back on it, I'm really glad we did it."

McCartney added that it was Linda who had encouraged him to "do something" after the break-up of The Beatles, and that led to the formation of Wings.

"People said to me,  'Get a big supergroup with loads of stars,' but for some mad reason I wanted to go back to square one and do it as we did in The Beatles," he said,

McCartney explained that the band helped him out of feeling "depressed" after the break-up of The Beatles in 1970.  "I was depressed," he said. "It was very depressing. You were breaking from your lifelong friends, we used to liken it to the army – we had been army buddies for a few years, and now you weren't going to see them again."

He added that he was also uncertain about his future at the time: "Not knowing if I was going to continue with music, that was depressing."

McCartney, who was being interviewed for BBC Radio 4's Mastertapes, said: "So I took to the bevvies. I took to a wee dram. It was great at first, then I was a bit far gone. Suddenly I wasn’t having a good time, it wasn't working.

The Beatles split in 1970, but there had been unrest in the group for about a year before over the appointment of Allen Klein as their manager.  McCartney resorted to suing his bandmates because of Klein's involvement, which led to a messy legal fall-out that caused the breakdown of his and Lennon's relationship.

McCartney told Wilson that in the years between The Beatles' breakup and Lennon's death a decade later, their friendship rekindled. "I would make calls to John occasionally," he said. "We just talked kids and baking bread."