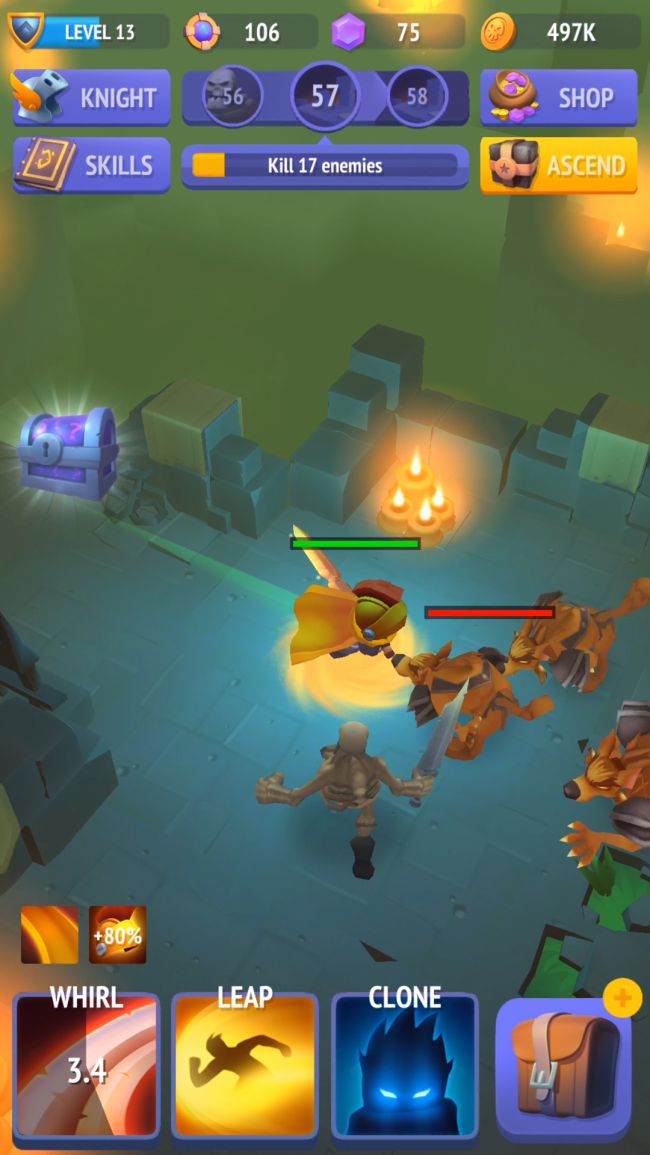 Nonstop Knight releases - free to download - for iOS and Android phones and tablets today. Antti Salomaa of Kopla Games, the game’s developer, explains the background to this mobile action RPG and how the team distilled a lifetime of PC gaming experience into this uniquely accessible and stress-free adventure.

Sharing an addiction to action RPGs, it would be scary to count how many hours we at Kopla Games have invested into such games on PC, particularly the Diablo franchise. The hugely passionate online community, the incredible depth of features for the player to discover and the sheer longevity and scope of the adventures. And not forgetting the feeling of being immersed in a rich universe of different characters and narrative paths.

But while we as gamers and developers are fully sold, we know this type of immersive experience isn’t for everyone, with many potential players deterred, even overwhelmed, by this hardcore ecosystem.

Looking at the Asian market over the past few years, action RPGs have hit the mobile gaming space in a big way, with developers placing a big design emphasis on game progression that doesn’t require the player’s constant interaction and commitment. This “auto-play” mechanic enables the player to only make key gameplay decisions, such as unleashing special abilities, selecting new weapons and gear and unlocking new items.

Inspired by the success of such games in Asia and fueled by a passion for bringing action RPGs to a wider audience, we began developing Nonstop Knight with this gameplay model in mind. So the first question became – how do we take all the best things about beloved action RPGs such as Diablo and package that into an experience that is accessible to everyone, regardless of their gaming experience?

One of the first steps was to look at the game’s interface and figure out how we design the action so it’s perfectly tailored for someone playing on their phone whilst on the go – walking to the office in the morning, taking a coffee break… in whatever circumstance. To achieve this, we had to distill everything we love about action RPGs into a series of simple buttons for people to easily control using just one thumb. This “one thumb” experience was super important to us – it symbolised the approachability of the gameplay and the way we want to design games for mobile. After all, it’s difficult to play a mobile game in landscape perspective when out and about and too often the control systems have simply been ported from a console version of the same game.

Another early consideration was how we strip away all the tutorials and time spent on-boarding the player. Essentially, we want people to immediately jump into our game and understand the core mechanics within minutes. This also involved creating a simple narrative and character back-story that is only briefly explained, leaving room for speculation from players. The Nonstop Knight is on an eternal quest, tackling one dungeon after the next and in each moment faced by hordes of fiendish enemies. How he got into this never-ending mess is something we have left open and look forward to exploring in the future.

We then looked at how most players consume a mobile game and what they want from that adventure. The buzz term we constantly use is “stress-free” and that’s exactly how we want the player to feel when playing Nonstop Knight. We invested a ton of time into considering how we remove the stressful, sometimes tedious aspects of the action RPG genre, allowing players to tackle the adventure at their own pace. This is why Nonstop Knight is designed so that the knight continues to advance in-game even when players have shut down the application and have no access to internet connection. In addition, as soon as players jump back into the action at a later time, they’ll be greeted with a heap of coins that the knight earned in their absence.

The player has a critical role in Nonstop Knight and that’s to keep the knight battling with the most powerful weapons, kitted out with the best armor and capes and powered up by rare abilities and items. There are also big bad bosses - with fearsome names like Chubby Cheeks, Edward the Eerie and Fedor the Fool - lurking at the end of every dungeon for the knight to face and the player must take a critical role in their demise. Therefore, the relationship between the player and the knight is very much a reciprocal one.

So, what should one expect from Nonstop Knight? Expect a game you can immediately pick up and play. If you’re new to action RPGs, we’ve designed the action so that it’s not going to overwhelm you with endless options and introductory tutorials. If you’re someone like us who has played hardcore RPGs for years (decades, in our case…), then we’ve packed so many features lying underneath the game’s simplistic interface, particularly in terms of dungeon progression after longer periods of play. As developers we’re excited to see how the community reacts to Nonstop Knight and in the coming months we’ll bring a slew of new features to the game, including new dungeons and enemies to tackle. We’ll also be introducing weekly tournaments to challenge players to compete against other dungeon brawlers from across the globe!