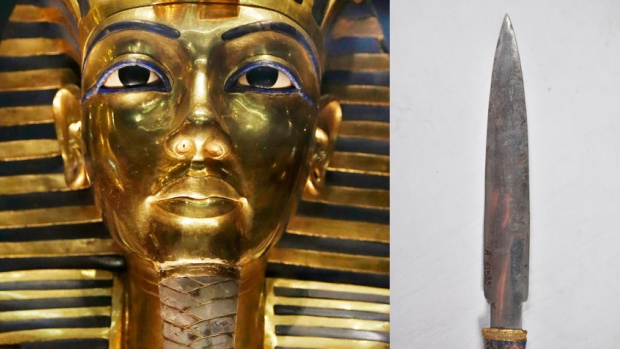 A famous dagger found in the wrapping of Egyptian King Tutankhamun's mummy was made with iron from a meteorite, a study confirms.

An analysis of the dagger's blade led by Daniela Comelli, a professor of materials science at the Polytechnic University of Milan in Italy, showed that it contains 10 per cent nickel and 0.6 per cent cobalt, the researchers report in the journal Meteoritics and Planetary Science.The analysis was conducted using a technique called X-ray fluorescence, which identifies different elements from the characteristic colours of X-ray light they give off when hit with higher-energy X-rays. Then they compared the composition of the dagger's blade with that of 11 metallic meteorites and found it to be very similar.

The dagger has an iron blade and a gold handle and sheath. A new analysis of the iron shows that it has a similar composition to known metallic meteorites. (Daniela Comelli/Polytechnic University of Milan)

The dagger was found by archeologist Howard Carter in 1925, three years after he discovered King Tut's tomb. The dagger was in the wrapping surrounding the right thigh of the boy king's mummy.  It had a decorated gold handle with a pommel of rock crystal, and the iron blade was protected with a gold sheath decorated with a pattern of lilies on one side, feathers on the other, and a jackal's head, the researchers reported.

The dagger dates back to the 14th century BC and is one of very few iron artifacts ever found from the ancient Egyptian culture, which isn't thought to have developed iron smelting until the 8th century BC — later than neighbouring countries, Comelli told CBC News in an email.

"The problem with iron working is related to its high melting point (1,538 C). Because of it, early smiths couldn't heat ore enough to extract iron and couldn't forge the iron into weapons," she wrote.

Earlier iron objects were typically ornamental or ceremonial and made of meteoritic iron that was considered more valuable than gold, the researchers wrote.

It was shaped by hammering, Comelli said. King Tut's dagger had been suspected to have been made with that type of iron, but it had not been confirmed.

"In this context, the high manufacturing quality of Tutankhamun's dagger blade is evidence of early successful iron smithing in the 14th C. BCE," the researchers wrote in their paper.

They added that the finding also provides insight into Egyptian descriptions of iron that appeared around 100 years later, which use the term "iron of the sky."

"The introduction of the new composite term suggests that the ancient Egyptians … were aware that these rare chunks of iron fell from the sky already in the 13th C. BCE," the authors wrote.